Cameron Pond parents continue fight to keep students where they are 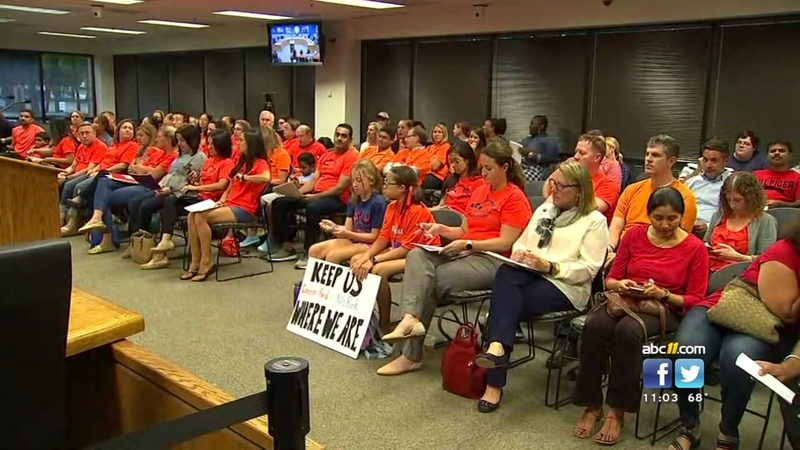 WCPSS gets an earful about reassignment plan

More than 20 speakers came to the podium to protest the assignment plan that would move their children from Mills Park Elementary and Middle schools to Carpenter Elementary and Alston Ridge Middle School. Alston Ridge is a new school that is yet to open.

"I stand before you with my neighbors as one community that is pleading with you to keep us where we are," said Beth Farrell, a parent. "I'm one mom trying to advocate for what's best for my children and for my neighborhood."

This is one of the more than 30 speakers tonight. Most are parents here to talk about reassignment plan. Draft 3 is set to come on October 16 #ABC11 @WCPSS pic.twitter.com/7YAyGZAU14

So far, only two drafts of the assignment plan have been released by Wake County Schools. A third is expected in two weeks.

"I have to respectfully say that I think moving Cameron Pond from Mills Park schools is like putting a little Band-Aid on a huge gaping wound," said parent Leslie Cramer. "It doesn't stop the bleeding; it just makes a bigger, stickier mess."

The district is trying to ease overcrowding and fill four new schools that are opening in the 2019-2020 school year, including Alston Ridge.

After draft one, parents sent feedback to the school board that noted why they'd like to keep their children at Mills Park. They argued that Panther Creek Greenway is nearly done and would connect their neighborhoods to the Mills Park campus. They also said it doesn't make sense to send students to a school that's farther away.

Lots of orange in the audience tonight once again as parents from mills park and Cameron pond community come to protest @WCPSS reassignment plan. #ABC11 pic.twitter.com/kOl0lWI3D5

"Rerouting Cameron Pond students to Carpenter Elementary, Green Hope, Weather Stone or West Cary Middle will force buses to navigate their way through the intersection of Carpenter Fire Station Road and Highway 55," said parent Krissy Campbell. "Our greenway connects to both an elementary and middle school where older children will likely walk independently without adult supervision - this goes hand in hand with supporting student safety as it provides a much safer path than the one middle school students are currently using.

"In the time that it has taken myself and one other person to address their concerns, our children will have arrived safely by bike to the Mills Park schools if you let them," Campbell added.

A fifth-grader also shared her concerns.

"You see I've already been transferred once in my short career in elementary school," said Maggie Whitham, a Mills Park Elementary student. "I remember also feeling devastated and scared. I had to leave behind several of my friends and had to adjust to not seeing them as much."