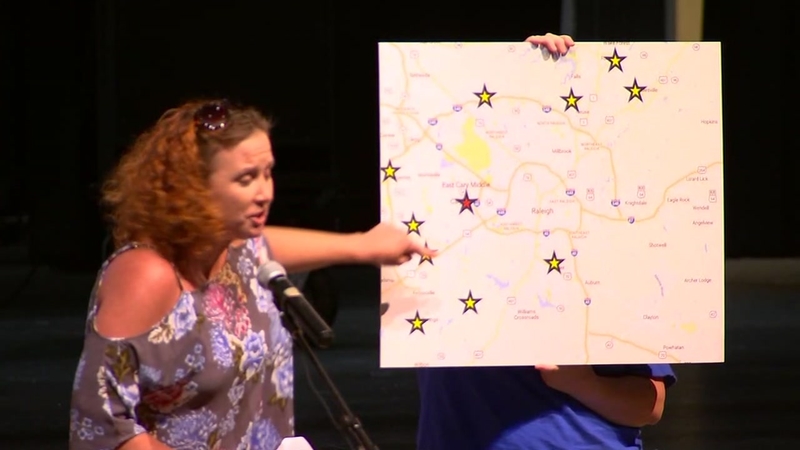 CARY, N.C. (WTVD) -- In their last chance to weigh in before the Wake School Board decides, parents and children came armed with plenty of props; detailed posters spelling out why they think district leaders are getting it wrong when it comes to the new school reassignment plan.

"Nobody has done a transportation study to see that I have to fight Interstate 40 to get onto US-1 to travel down and drop my kid off and turn right back around and travel another 30 minutes to get back to work," said Laura Douglass, echoing a common theme about the school proximity issues the new plan creates for many families.

The contentious reassignment plan comes as Wake County readies to open three new schools in Cary next year. But the openings trigger ripple effects through east and west Cary and Morrisville as well.

The board will switch some schools from multi-track year round to traditional calendar or vice versa.

"The board is bullying our neighborhoods into going to schools that we are not remotely close to as our traditional option," said Amber Von Bokern, a Morrisville mother with children at West Cary Middle School.

The plan may also force many families at popular neighborhood schools like Davis Drive Middle School in west Cary to be reassigned to East Cary Middle. Many students at DDMS happily walk there. They would now face a much longer bus ride nearly four times as far away from home.

"It's not fair to push our kids out now to make room for kids who will move here some day. Those kids aren't here," DDMS mom Ngoc Hulbig said to loud cheers from many in the crowd.

Wake School Board Chairwoman Monika Johnson Hostler listened in the front row along with several board members. The panel wants to make a final vote on Nov. 20.

Some parents are concerned that the panel is moving too fast.

"Families from Davis Drive are still without feedback, without input, without direction and without knowledge of where things stand, good or bad, with our children's reassignment," said DDMS dad Brandon Bryce.