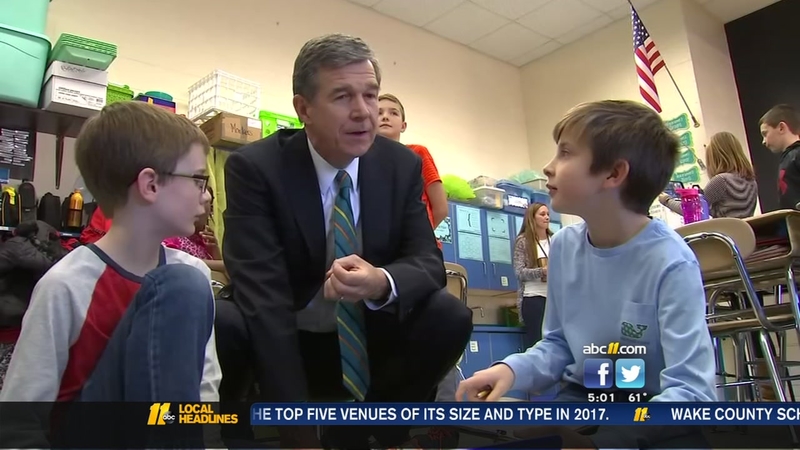 RALEIGH, NC (WTVD) -- Lawmakers are returning to Jones Street on Wednesday for a special session. They will be greeted by dozens of parents and education advocates who want lawmakers to repeal the class size mandate.

"The choice is either to fund it or phase it in over a period of time to give the schools the opportunity to deal with this," Gov. Roy Cooper said.

The mandate would take effect in August and is meant to shrink class size in kindergarten through third grade.

"(It' looks) good on paper. It's a nightmare in reality if they don't fund this," Cooper said.

. @NC_Governor is touring Penny Road Elementary School, where this 2nd Grade music class could be on the chopping block. Principal says the elective and others could vanish as she works to adhere to new class size mandate #abc11 pic.twitter.com/NMn35SqcKY

Cooper met with the principal at Penny Road Elementary School and toured the facility. This particular Wake County School would have to place eight more students in fifth-grade classes to free up teachers and send them to teach at a lower-level class.

Art, music, and physical education specials would also be cut.

The WCPSS said it would have to hire more than 400 new teachers, to the tune of $24 million, to keep things at "status quo."

This past weekend, fired-up parents braved frigid temperatures and rallied outside the General Assembly. Many have signed a petition begging lawmakers to repeal the current law.

Some Republicans are backing the mandate.

"We understand how important that is to early learning, literacy and it's proven in the core subjects," said Sen. Chad Barefoot.

Barefoot said districts have been given time and money to prepare for the changes.

"To be fair, the General Assembly has been giving money to reduce classroom sizes over the past several years and it just wasn't happening out there in our schools," Barefoot said. "So part of the bottleneck that we're feeling is the fact that superintendents in many school districts did not reduce the classroom sizes or hire additional teachers when they should have with the money we gave them."