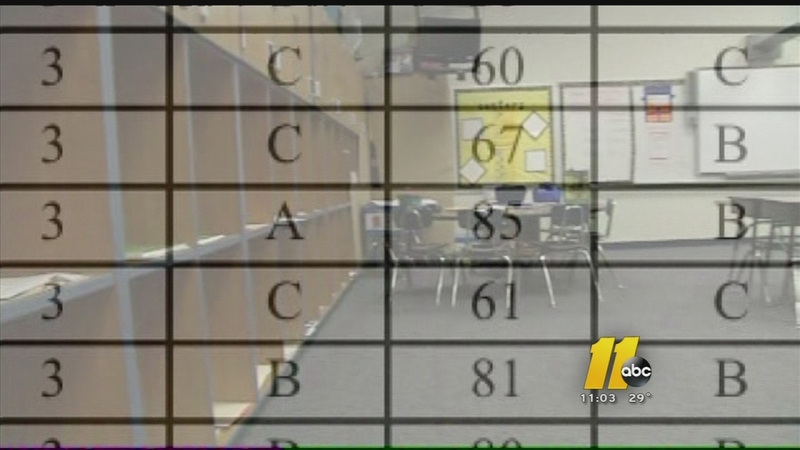 RALEIGH (WTVD) -- All public schools in North Carolina got letter grades from A-F from the State Board of Education Thursday.

About 29 percent of schools got a "D" or "F". All schools assigned those grades must send a letter to parents informing them.

The statistics show traditional public schools both fail less and shine less than public charter schools. They also show that schools where a majority of students fall below the poverty line overwhelmingly got Ds and Fs.

State education officials said another way to look at the numbers is over two-thirds of schools got a C or better.

"They are not as bad as many thought they would be, and they're not as good as we want them to be," said State Superintendent Dr. June Atkinson.

In an earlier statement, Atkinson cautioned that the grades are not the bottom line on any school.

"One letter grade cannot reflect all of the positive things happening in a school," she said. "It's important for parents to talk to a school's principal and teachers and to look at all of the school measures reflected in the North Carolina School Report Cards to determine how their child's school is doing in comparison to others in the district and across the state."

Elementary and middle schools are being judged on student achievement in mathematics, reading, science, and biology. High school grades are tied to student scores in math, English and biology as well as graduation rates and the percent of 11th-grade students who score well on a college entrance exam they all must take.

North Carolina joins more than a dozen other states that have adopted the system which was adopted by state lawmakers to begin in the 2013-2014 school year.

In Wake County, school leaders said Wednesday they don't support the system and instead released their own report one day ahead of the state report card.

"We have never believed assigning a single grade to a school makes much sense," said Superintendent Jim Merrill. "Our parents understand there is much more to a school than one grade can reflect."

The progress reports from Wake County Public Schools are broken up into categories of grades, quality of faculty, teachers' views about the school climate, and leadership. All of this information is then compared to state and school district averages.

Progress reports for all Wake County Public School System schools can be found on the district's website at www.wcpss.net/schoolreportcards.

Meantime, counties statewide braced for the numbers. Some were expecting dismal results. Last month, Durham Superintendent Bert L'Homme warned that the county should prepare for mostly 'D's and 'F's. He pointed out though that those same schools surpassed growth expectations.

Looking at the numbers released Thursday, out of 56 total schools in Durham County, three were not graded. Among the remaining 53, here's the breakdown:

Wake County parent Marcus Hicks has a daughter on the honor roll at Rolesville Middle School, which received a 'C' grade from the state. He has mixed feelings from the news.

"I could see how that could be possible," said Hicks. "It's a new school."

However, Hicks becomes concerned for those looking at the school from the outside, who may be using the grading scale as a deciding factor on where to move.

"They don't get a true representation," said Hicks. "If someone comes into the area and it's based on the school being new, [they] haven't been able to build their program then no it's not fair."