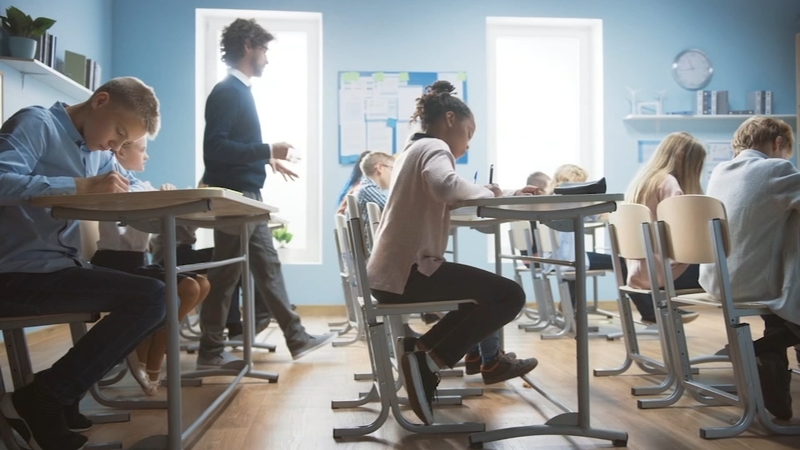 RALEIGH, N.C. (WTVD) -- Republicans at the General Assembly have voted forward a bill that adds North Carolina to a growing list of states introducing legislation to limit the use of Critical Race Theory in public schools. But, what is the concept? Is it the indoctrination of children that some critics says it is? Or is it much ado about nothing?

From his Triangle classroom, Kumar Sathy teaches some of all the core subjects: math, science, and history.

"Critical Race Theory is not something I'm teaching my fifth graders," Sathy said. "It's not a theory that I know very much about. It's an academic concept."

A concept that has turned into a national controversy. Republican Lieutenant Governor Mark Robinson has led the charge against it in Raleigh

Critical Race Theory a set of academic themes, including that racism is baked into the nation's systems and institutions impacting outcomes for people of color.

Diving into the debate over Critical Race Theory in the classroom • An NC House bill joins a list GOP-backed bill nationwide banning the concepts from public school instruction • Is it about stopping indoctrination or is it a distraction?
AT 11 #abc11 pic.twitter.com/jzvovufT7q

Critics think its reverse racism. The North Carolina bill aims to keep people from being made to feel guilty about their race because of past actions of people of their race.

"It simply prevents schools from endorsing discriminatory concepts," said Gaston County Republican Rep. John Torbett on the floor of the House, in defense of the bill.

What is a part of Sathy's classroom discussions, he says, is the topic of race and racism: talking about race; identifying racism and counteracting stereotypes.

"Where is the line between indoctrination and good teaching," Sathy asks. "If I teach my students not to bully each other, am I indoctrinating them? For teachers who teach history, in particular, race and racism is a core part of it. It's a part of our history and can't be removed or shouldn't be removed."

"I find it to be a solution looking for a problem," Stroman said. "The best space to talk about race and racism is in the classroom. Because we're supposed to be open to ideas and thoughts."

"I've had a colleague tell me I teach too much anti-racism -- whatever that means," he says, "But my students' parents have been overwhelmingly supportive."

Stroman feels critics of Critical Race Theory are using it as a boogeyman. She says it is not being taught at K-12 schools and even at universities, it's a graduate-level concept.