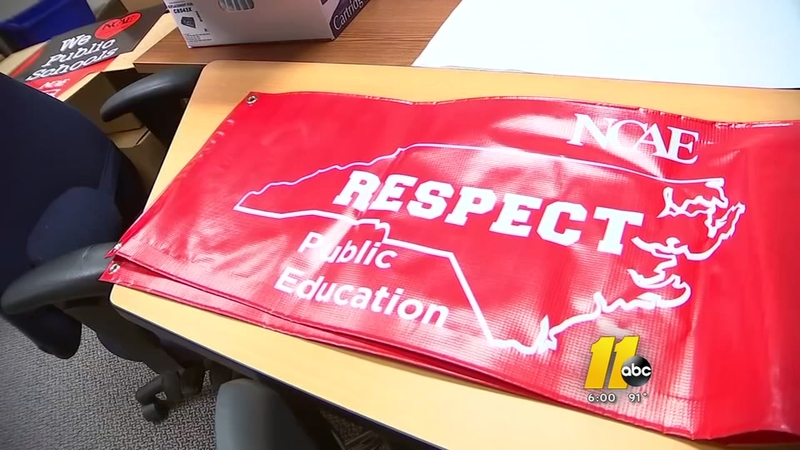 Teachers gear up for May 16 rally

RALEIGH, NC (WTVD) -- There are cases of water stacked inside the North Carolina Association of Educators headquarters waiting to be handed out.

There are also boxes of red tee-shirts and bags of buttons. Some signs have already been made and in the place dubbed "The War Room," staff is still working out the logistics of the upcoming rally that's expected to bring thousands of teachers together.

"What they've been doing to our public schools is not right," said NCAE President Mark Jewell.

The association says the objective for the May 16 rally, on the opening day of session, is to get more resources.

"We have classrooms in elementary school and fourth-grade that have 35 students or higher in some instances. This is not normal," said Jewell.

Dozens of school districts are canceling classes so teachers can attend the demonstration.

The rally is being met with backlash.

Some Republicans are calling May 16 a strike -- and an illegal one since North Carolina is a Right to Work state.

"If the teachers want respect, and I believe they deserve respect, they also have to reciprocate," Brody told ABC11 on Monday. "Number one, respect our laws. Number two, respect the children that's in you're in care. Number three, respect the parents who have to scramble around now and find alternatives for this."

He said he believes unions try to hijack the education system.

"I just do not support that method and I will adamantly fight to keep the public employee unions out, adamantly," said Brody.

Jewell is responding to the characterization.

"We found that offensive and it's just another example of educator disrespecting," he said

He says the state needs to increase per-pupil funding to the national average and raise teacher pay.

Officials are expecting roads to be clogged as educators and their supporters head downtown.