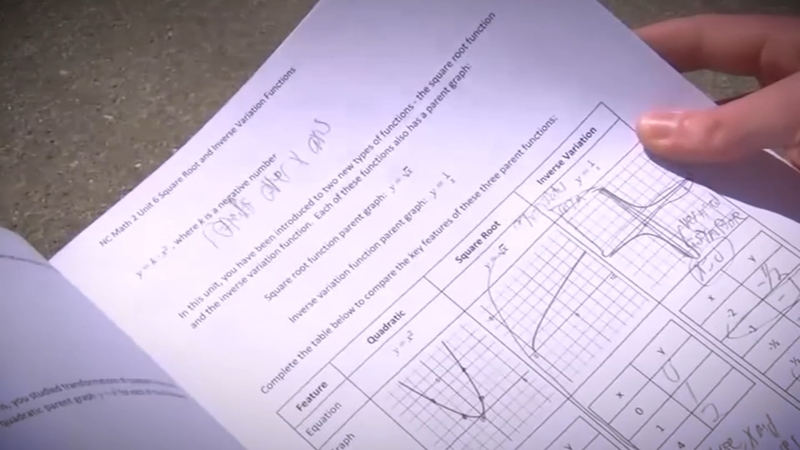 The recommendation comes after 139 classroom observations and 3,000 parent survey responses about the controversial math curriculum that's been at the center of several parent and student protests.

It also sparked a lawsuit between a parent and the company that created the curriculum.

Some parents argue that their kids are suffering.

"It needs to be gone," said parent Carrie Bley.

"He (my son) didn't learn much," said parent Blain Dillard, who has been a strong opponent.

Dillard was sued by MVP after heavily criticizing the program and he fired back with a counter lawsuit.

The cases were dropped and Dillard's hoping the same will come of MVP.

"The teacher wasn't teaching, plain and simple," he said.

The program encourages students to think outside of the box and work together to solve real-world problems.

The consulting group did make some recommendations to improve the program and one is to provide supplementary resources to help kids.

"If you have to add a curriculum to a curriculum, that's not something worth saving," said Bley.

The suggestion was also made that some teachers need additional training to better implement MVP.

#MVP recommendation coming with lots of commendations as well. Clearly, the firm hired by @WCPSS concluding vocal outcry from some parents & students is exception & not the rule; encourages Board to run “informational campaign” to boost support. @ABC11_WTVD pic.twitter.com/rJMRKVXQtF

The Wake County School Board has stuck by the program despite the outcry from families.
Report a correction or typo
Related topics:
educationwake countymathstudentswake county schools
Copyright © 2021 WTVD-TV. All Rights Reserved.
TOP STORIES
TIMELINE: NC weather could include severe storms today
Photos released from shooting during Juneteenth event in Raleigh
Husband wanted for questioning in wife's disappearance
LATEST: Nursing home deaths jump 32% in 2020
Woman shot by home invader in Durham
Child tax credit: Will you be getting monthly payments?
Republicans ready to block elections bill in Senate showdown
Show More
Task force aims to save Outer Banks highway from flooding
NC troopers to beef up patrols on I-95
Ways you can save money next time you rent a car
Low-wage tenants join in on Raleigh's Moral Monday rally
Old JCPenney store in North Hills undergoing a transformation
More TOP STORIES News