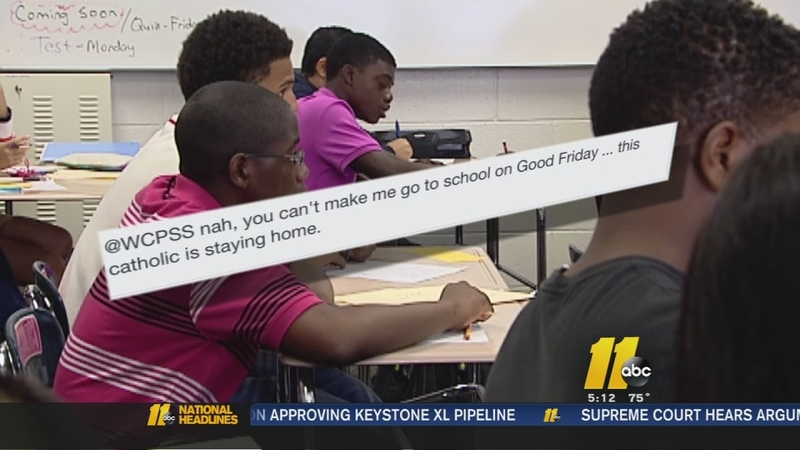 RALEIGH (WTVD) -- Parents, students, and teachers are taking to social media to let Wake County Public Schools know they don't like the plan for making up snow days.

At the end of their meeting Tuesday night, school board members were in favor of a plan to hold make-up days on Good Friday and two Saturdays in April and May.

Teachers are pushing back on social media letting the school district know their students won't show up for class on a Saturday, rendering the time meant for instruction pointless.

One teacher wrote, "It is impossible to teach anything new to a half empty classroom on a Saturday."

Another teacher tweeted their disappointment to WCPSS, calling the move a "horrible decision."

Students also chimed in letting WCPSS know they wouldn't be in class, but rather in church on Good Friday or at work where they're scheduled on the weekend shifts.

The district could have added 20 minutes to every school day from now until the end of the year, but administrators argue that option is flawed.

"The concern that's been expressed is really the value of that instructional time spread out- 20 minutes- spread out across the school day in block schedule courses, it's adding five minutes to the class," explained Cathy Moore, Deputy Superintendent of School Performance for Wake County Schools.

The idea of adding days onto the end of the school year was also thrown out as testing schedules and graduation dates have already been set.

Administrators are still working to finalize the dates for the make-up days. They're expected to be released by the end of the week.