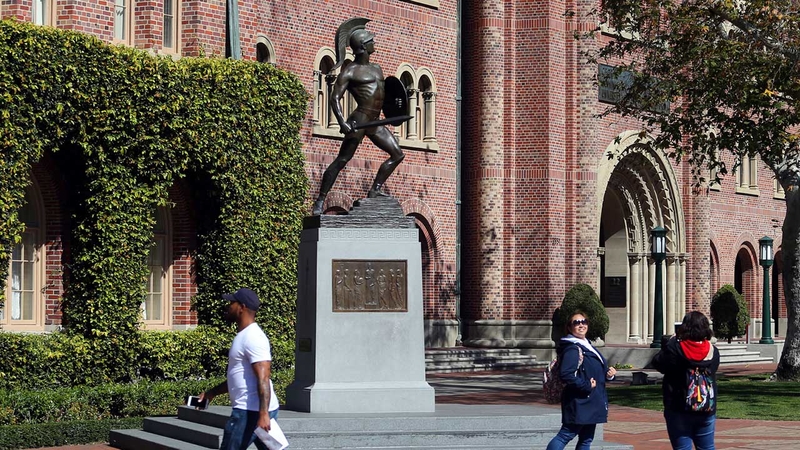 USC offers free tuition to some students to increase access

LOS ANGELES -- The University of Southern California announced Thursday that it will phase in free tuition for students from families with an annual income of $80,000 or less, and home ownership will not be counted to determine a student's financial need.

"We're opening the door wider to make a USC education possible for talented students from all walks of life," USC President Carol L. Folt said in a statement. "This significant step we are taking today is by no means the end of our affordability journey."

Folt previously held the position of Chancellor at UNC. She took over in 2013 after Holden Thorp.

Folt served through January 2019. She resigned amid the controversy surrounding the Confederate monument Silent Sam. In her resignation letter, she announced plans that the toppled statue would be removed from UNC's campus.

Folt was named USC's president in 2019 as the university was addressing a series of major scandals, including the college admissions bribery case.

That scandal came in the wake of allegations that USC ignored complaints of widespread sexual misconduct by longtime campus gynecologist George Tyndall and an investigation into a medical school dean accused of smoking methamphetamine with a woman who overdosed.

The tuition changes at USC will be phased in beginning with first-year students entering USC in the fall of 2020 and the spring of 2021, the university said.

Thousands of California residents can now attend two years of community college for free, thanks to a new program being promoted by Governor Gavin Newsom.

According to Folt's statement, USC will increase undergraduate aid by more than $30 million annually. When fully implemented, the expansion will allow the university to provide stronger financial assistance to more than 4,000 students every year.

About one-third of the fall 2020 and spring 2021 entering class are expected to benefit from the increase in financial assistance.

"With this new initiative, we will be even better positioned to recruit students from all backgrounds and strengthen the USC experience for everyone," said Charles F. Zukoski, the university's provost.

Two new policies will make a USC undergraduate education more affordable for those who most need financial assistance! https://t.co/IHcuP2aQkc