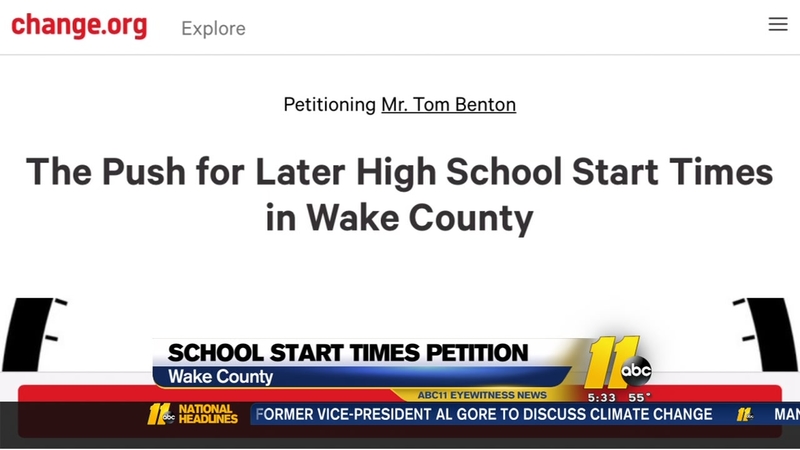 WAKE COUNTY (WTVD) -- Sleep-deprived teenagers in Wake County are hoping to get their school day started a bit later.

Two Apex Friendship High School students are behind two separate petitions launched on Change.org that are gaining support, demanding high schoolers be allowed to sleep in.

"The Push for Later High School Start Times in Wake County" created by 10th grader Nylah Robinson and "We need sleep!!!" launched by 11th grader Madison Baddick-Traylor are gaining signatures with hopes of delivering a strong message to members of the Wake County Board of Education and Superintendent Jim Merrill.

Tom Benton, who lost his re-election bid as board chair, is also named in the petitions along with Gov. Pat McCrory who conceded to Roy Cooper Monday.

Right now, the bell at high schools across North Carolina's largest school system rings at 7:25 a.m.; that's much earlier than in neighboring Durham County where school board members just last year pushed back the start time at most high schools to 9 a.m.

Administrators noted on the district website that the change for teenagers in the 2016-2017 school year is, "hopefully allowing them to sleep a bit more and therefore be more attentive and capable of learning during their school day."

One reason Luten noted for the change was student-athletes who had to leave class early in order to participate in a sporting event.

Luten said another challenge to change is money.

An interruption in the district's three-tier transportation system in which the same buses run routes between elementary, middle, and high schools would mean hiring more drivers and costing an estimated $100 million.

As of now, Luten said the Wake County school board has not asked district staff to study the impacts of bell schedule changes for high schools.

Newly-elected board members will be sworn in at Tuesday night's regularly-scheduled meeting.