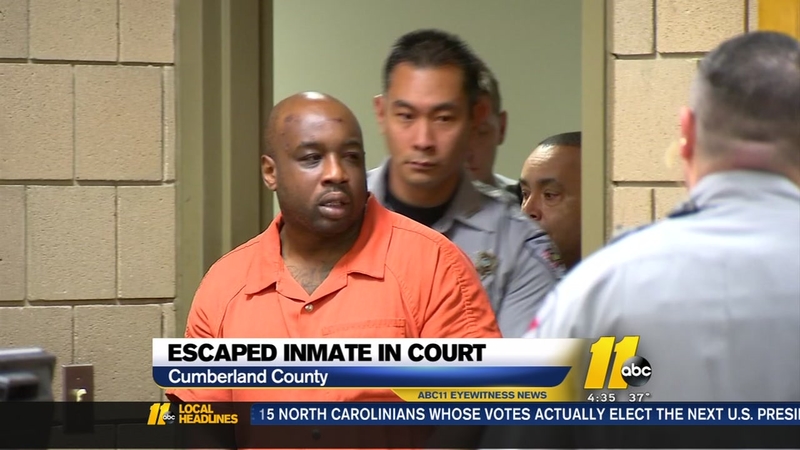 FAYETTEVILLE, North Carolina (WTVD) -- People in Cumberland County are feeling safer on the streets after escaped inmate Edward Moore is back in custody.

ABC11's cameras were there exclusively as Moore, whom authorities called "very dangerous" was taken into custody.

On Monday morning in court, district attorney Billy West requested he be held at Central Prison in Raleigh where authorities are better equipped to deal with the flight risk.

Moore, who had been in the custody of the Cumberland County Sheriff's Office on a slew of charges in connection with a Hope Mills bank robbery, escaped Wednesday night.

He did so at Cape Fear Valley Hospital, where he had been taken to for assumed treatment. He assaulted a deputy and then stole a car that was left unattended.

Moore's escape prompted a multi-agency manhunt up until his capture during the weekend.

He was finally taken into custody Saturday night after taking a hostage before a brief standoff with law enforcement.

On Monday, Moore made his first court appearance since his capture. Monday morning, West thanked U.S. Marshals, the Sheriff's Office, and Fayetteville Police for helping get Moore back in custody.

The judge refused to lower Moore's bond Monday. It is set at $1.45 million.