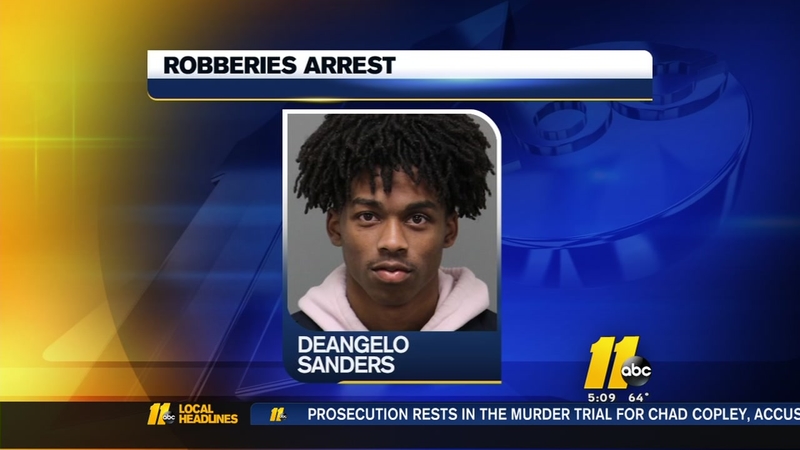 Arrest made in Raleigh crime spree

Investigators were staked out the Paddington Station shopping center at the intersection of Wake Forest and New Hope Church Roads three days before Christmas.

That's when a 78-year old Raleigh woman was approached by a teenager as she was unloading her cart in front of the Walmart.

"I said, 'Is there something I can do to help you?' And he didn't speak. He simply grabbed my purse which was wrapped around my arm and my thumb," said the elderly woman, who didn't want to be identified.

Luckily for her, an undercover police officer was nearby.

"There was an unmarked police car in the parking lot that heard all of this happening when I started screaming and took off after the car to block him, to keep him from going out. Well, the car rammed the police car and kept going anyhow."

But according to the search warrant, police soon caught the suspects.

In the warrant, police say they were investigating numerous crimes in that area that began in August of last year including three stolen cars, at least eight purse snatchings, and four armed robberies.

Of four suspects mentioned in the search warrant, only one has been charged as an adult so far.

The others are either younger than 16 or haven't been charged.

And the one who is charged as an adult, DeAngelo Sanders, is barely considered an adult at 17.

Though a purse snatching may sound like a fairly low-level crime to many of us, it a very personal and often very violent crime.

The Raleigh woman who spoke to ABC11 and didn't want to be identified said her arm and shoulder were badly injured.

"I'm still suffering and facing surgery because of it," she said.

But she said she also feels fortunate.

"I realized that I had been blessed that day as much as I had been hurt because the young man meant to hurt me but the people around me were God's angels protecting me and caring for me," she told ABC11. And in an amazing show of compassion forgiveness and grace she added, "My heart reaches out to them because I feel like maybe they have been hurt somewhere in their life and that's the reason they are doing what they're doing in this world. And I don't want them hurt. I want them to have a second chance to meet God and to find faith and hope in this world instead of hatred."