'Doing politics better:' How a Wake County candidate diffused an angry confrontation at the polls 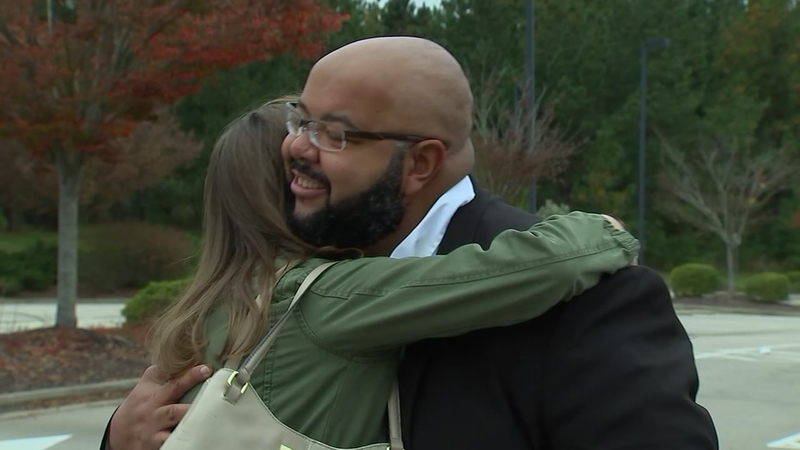 CARY, N..C (WTVD) -- In a political climate where even personal friendships and family relationships are being strained, something truly remarkable happened at a Wake County polling place on Election Day.

At Carpenter Elementary School in Cary, a first-time poll volunteer said she offered a Democratic voting guide to a man who went off.

"He came about five inches from my face and said, 'I'm a woman hater and I'm a racist and I don't want your materials,'" Anne Kubitsky told ABC 11.

She said a Republican candidate who was nearby heard the comment.

Emmanuel Wilder, who was running for a state House seat, said he had just spoken with the man.

Then Wilder, who is black, heard the comment about racism and sexism.

So he decided not to let it go and confronted the voter about what he said to Kubitsky.

"All she asked you is if you wanted a Democratic voting guide. All that was uncalled for," Wilder said, then he added, "His response to me, 'well, there's so much anger.' I was like, 'I understand people are angry. It's a trying time, politics are very personal to people but we have to do politics better.'"

Wilder said he never brought up race or gender.

He just tried to reason with the man about civility and ended the conversation this way:

"'Part of what doing politics better is about is admitting when you've done wrong. And you need to go and apologize.'"

He said the man agreed and then turned and walked toward Kubitsky.

She said she was fearful until the man got close.

"His face softened. And he just said, 'I'm really sorry.' And it just like, I was expecting him to maybe attack me. So it was just this, like, it totally defused the whole thing."

She said the man expressed remorse, telling her, "'I said some things that I shouldn't have said and I'm sorry.'"

Kubitsky said that touched her heart.

"I was so moved by it that I just like gave him a hug," she said.

On Monday, Kubitsky and Wilder went back to Carpenter Elementary to tell their story to ABC11.

Kubitsky was happy to have another opportunity to tell Wilder how she felt.

"I was really amazed at what you were able to do. Thank you so much," she said.

Wilder responded, "I just consider myself fortunate to have been in the right place at the right time."

Kubitsky said Wilder, who is physically imposing at 6-foot, 6-inches tall and 300 pounds, handled the situation with aplomb.

"You didn't call him out in a way that took away his own integrity. And I think that brought out his humanity and the love in his heart," she said to Wilder.

Kubitsky runs a non-profit called the "Look for the Good Project." It teaches school children to not only do good deeds but to reward others who do good deeds by acknowledging those good deeds.

The project hands out business-sized cards that note, "The person giving you this card really appreciates something you did. Please pass this on when you see the good. too!"

Kubitsky admitted that under the current political climate even she may not have been 'looking for the good' in Republicans like Wilder or even the man who yelled at her.

"I am noticing that I have my own biases. And so this is a good experience for me because I just sort of thought, 'Oh, the Republicans are going crazy.' But really, we are human and that's really what this is about. And I think when you have an experience like this that brings people together from both sides of the aisle, we need more of that," she said.

Wilder says that's been a hot topic with him, too.

"In my political friends circle, we challenge ourselves every day to do politics better. And that requires standing up and speaking out when we see stuff like this," the former candidate said.

Wilder may have lost his bid for a seat in the state House of Representatives but he has renewed the hope of many that Americans can get past their political divisions.

Kubitsky gave Wilder a book called 'Together We Rise' as a token of her gratitude then told him, "You renewed my hope in our country in sort of helping me 'look for the good' so I really want to thank you."

Then the two embraced.