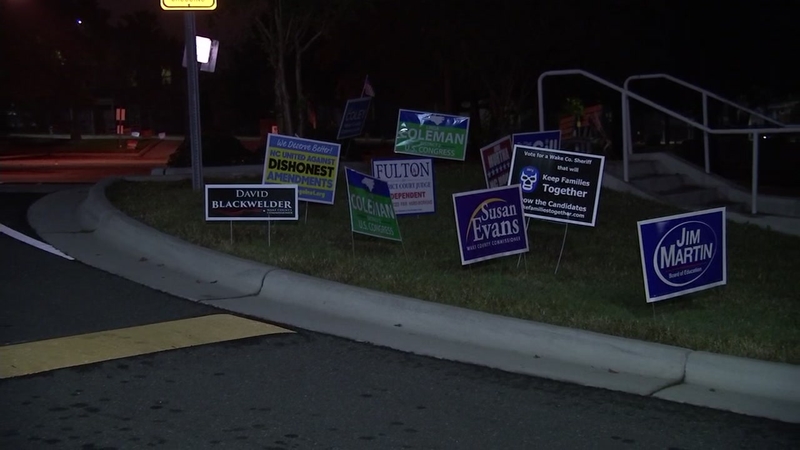 RALEIGH, N.C. (WTVD) -- In this 11th hour before voters walk into North Carolina polling places to decide what party will control the state legislature, we found Democrats and Republicans not campaigning, but mobilizing.

In the basement of the state's Republican Party headquarters, a small army of GOP 20-somethings worked the phones.

NCGOP Executive Director Dallas Woodhouse was leading the troops in what's been a months-long effort to hold onto Republican supermajorities in the state House and Senate.

But to keep that power to override any vetoes by Gov. Roy Cooper, Woodhouse has to tend to the more mundane details: do Republican voters know what time the polls open and close, do they need a ride, and what about the weather?

With only hours before the polls open across North Carolina and the balance of power at the legislature at stake, Republicans and Democrats are working feverishly to ensure their voters show up at the polls tomorrow. #ElectionDay2018 #ncpol #abc11 pic.twitter.com/3zaVGqpiGp

"The earlier (they vote) the better, the earlier the better," Woodhouse said to the young volunteers. "Weather will be better earlier, so just keep pounding that in."

The night before Election Day is about making sure your voters show up.

"At this point (the name of the game is) to make sure that the people that want to vote, can vote," Woodhouse told us. "We don't see indication of some big blue wave. But we do have some close races and we need a good Republican Election Day turnout."

The two are rallying the troops with optimism that Democrats can wrest back the balance of power on Jones Street.

"Our No. 1 goal is to take over the majority," said Gill. "Our short-term goal is to break the supermajority."

Holley takes her optimism one step further: "I hope that the enthusiasm is such that we will take back the House. That's what my hopes and dreams are and I'm sticking with that."

Both Democratic and Republican party leaders see a "Trump Effect" at play across the state; voters gravitating to this midterm election to voice their approval or opposition to the president. The two sides diverged on which party it would benefit or hurt.
Report a correction or typo
Related topics:
politicsraleighwake countyncelection dayelection 2018state politics
Copyright © 2022 WTVD-TV. All Rights Reserved.
TOP STORIES
Snow likely to start around midnight, last until sunrise
New study highlights where you are most likely to catch COVID-19
In wake of Pittsburgh bridge collapse, how safe are NC's bridges?
Restaurants, battered by wintry weather, hope business stays brisk
News & Observer: There are 54,000 possible Cook Out combos
Cooper vetoes bill that would push NC primary to June 7
How many times can I reuse my N95 mask?
Show More
10 injured in PA bridge collapse; human chain formed to help
Decades after TV anchor disappears, convicted rapist denies connection
LATEST: Breakthrough cases make up 37% of new COVID infections
Durham Police arrest two in Nov. shooting that left 1 dead, 2 injured
Moderna launches trial for HIV vaccine that uses mRNA technology
More TOP STORIES News