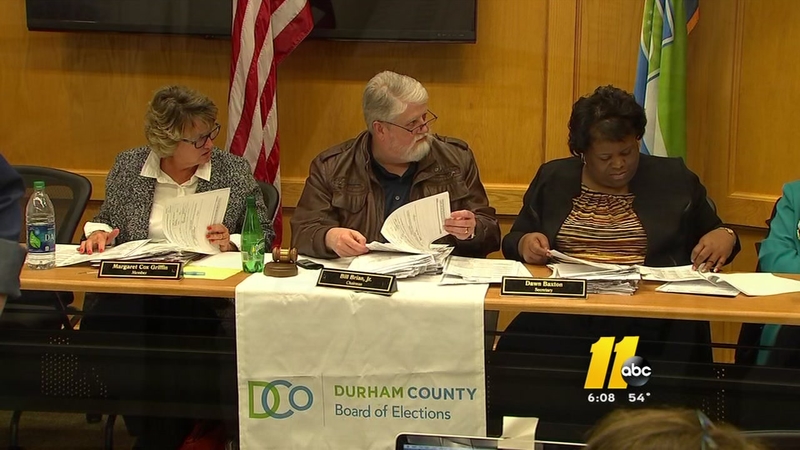 DURHAM (WTVD) -- Another day, another delay in the race for North Carolina governor.

On Thursday, officials at the State Board of Elections finalized an order for Durham County to recount approximately 94,000 votes because of a Republican protest. The five-member board voted 3-2, along party lines, to grant the recount after a lengthy hearing and appeal from lawyers representing the North Carolina Republican Party.

On Thursday night, the Durham County Board of Elections said it would hold an emergency, closed-session meeting on Friday morning at 8:30 a.m.

Bill Bryan, Chairman of the Durham County Board of Elections, sat down with ABC11 to discuss what the recount would look like and how much the recount will cost in time and money.

The first step in the process is a public meeting hosted by the Durham Board of Elections, which will spell out the logistics of the recount, including location, staff and budget. Bryan originally said the process could last a week, but the new order mandates the board and election staff work overtime through the weekend to complete the process by Monday at 7 p.m.

"Well, there's 94,000 ballots," he quipped to ABC11. "They have to be handled by hand and fed into the machine. It takes a certain amount of time to do that."

It will also take a certain amount of money, and that won't be known until after this is over (also unknown). Bryan said he expects the board to meet early next week to get the process moving.

"I hate not knowing, but that's the reality."

The recount order comes in the waning days of a contentious election, with Democrat Roy Cooper leading the incumbent Republican Governor Pat McCrory by 10,256 votes - greater than the threshold for a mandatory statewide recount. Cooper's lead has steadily grown since counties began counting absentee ballots and judging provisional ballots, but Republicans filed more than 50 protests in dozens of counties alleging either voter fraud or malpractice.

The issue in Durham County dates back to Election Night, when some tabulators counting early votes ran out of memory. Election staff then hand-counted 94,000 votes under strict supervision. Technicians eventually helped pull the data, which confirmed the results of the hand count.

Still, Republicans argued there's nothing wrong with the recount if it reconfirms the results because it helps give confidence to the voters in case there were any doubts or questions.