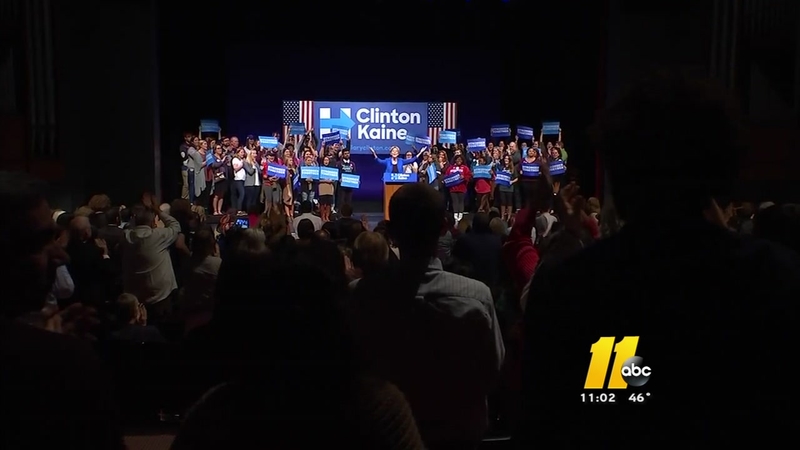 RALEIGH (WTVD) -- As Donald Trump prepares to return to the North Carolina, a battleground state, on Wednesday, Hillary Clinton sent her toughest-talking surrogate to rally her base in Raleigh.

Inside a packed Jones Hall on campus at Meredith College, Senator Elizabeth Warren embraced her role as the energetic economic messenger for Clinton-- blasting Trump's economic plans as the policies of the past that led to the Great Recession.

"Donald Trump says, 'Oh things are rigged!' Yeah you're damn right they're rigged. They're rigged for billionaires and it's time to fight back!" Warren said to cheers.

The Massachusetts Senator did not hold back in her contempt for the Trump campaign.

At one point during her 30-minute speech she called Trump, "a pathetic bully." At another, she used, "a small insecure money grubber." She wrapped up by calling Trump, "a selfish sleazeball."

In Raleigh and around the country, Warren has been Clinton's attack dog, perhaps saying the things Clinton can't say herself.

"I think Hillary would like to say those things. But she's got Elizabeth to do it for her," said Clinton supporter, Gail Scheck, sitting in the audience at Meredith.

Meanwhile in Durham, Karl Rove, the man behind former president George W. Bush's political and presidential rise to power, was weighing in on the campaign at Duke University.

Republican strategist conceded Clinton has the national lead on Trump in the polls, but Rove suggested Republicans still have to reason to hold out hopes for winning back the White House.

"It's likely to be closer on Election Day because that's the way it goes," Rove said.

"This has been a weird election and there could be an October surprise," Rove told the audience. "Something may happen that causes people to say no to her and yes to him."

Perhaps that "something" is the health care law. Trump spent most of Tuesday tweeting about Obamacare -- blasting the Obama administration's recent announcement that projected double-digit Obamacare increases in 2017.

Expect to hear more of that line of attack, Wednesday, when Trump arrives back in North Carolina for campaign events in Kinston and Charlotte.