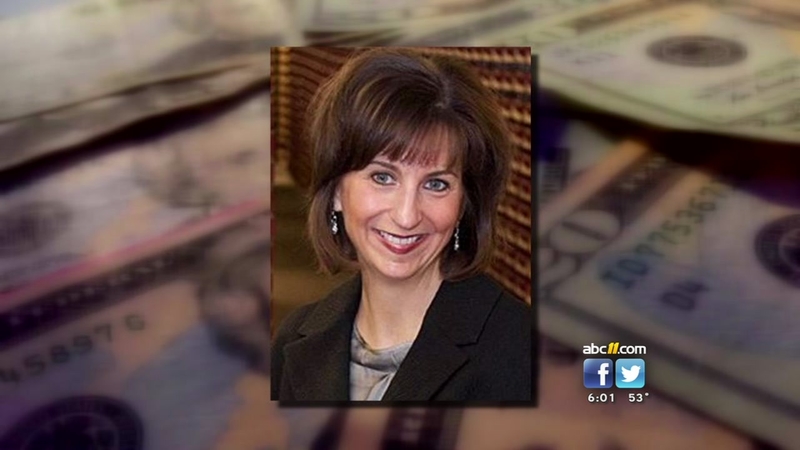 WAKE COUNTY (WTVD) -- The fourth person indicted for allegedly stealing from the Wake County Register of Deeds office has turned herself in.

According to recently unsealed search warrants in the case, Gearon told an SBI investigator the cash deposited to her personal bank accounts came from a friend, her mother, and son. The investigator sai her son had a low-paying job and he deposits continued after her mother died and when he asked for the name of the friend, Gearon ended the interview.

READ MORE: Former Wake County Register of Deeds turns herself in to authorities after being indicted for allegedly stealing money

Gearon was hired to work in the office by Riddick who was first elected as Wake's Register of Deeds in 1996.

The man who was appointed to replace Riddick, an attorney who is also a former judge and banker, was shocked when a search warrant revealed that the State Bureau of Investigation believes Riddick deposited more than $875,000 in cash in her personal bank accounts over a six-year period.

"I had always assumed that it would be better hidden than just putting it right into your bank account," Charles Gilliam told ABC 11.

He wasn't the only one shocked by the money trail.

"It's difficult to come up with some kind of innocent explanation for that much money in cash being deposited in your personal account over that period of time," former prosecutor and longtime Raleigh defense attorney Karl Knudsen said.

Knudsen added that it also tells him something else, "She naively believed that nobody would connect the dots."

He said it would appear that Riddick may have deposited amounts less than $10,000 since that amount triggers a mandatory report to federal authorities.

But, if she did, he said she may end up answering questions from federal investigators.

"If there is a deliberate attempt to circumvent that reporting requirement by depositing amounts that are close to but under the triggering amount, the federal government frowns on that," Knudsen told ABC 11.

Meanwhile, the man now running the Register of Deeds office said he's taken serious steps to prevent others from embezzling.

"We've just trained everyone in the office who has anything to do with money or customer transactions to be an auditor," Charles Gilliam said.

And he said those employees rotate shifts auditing other employees.

"You have about 20 some people who over time will be checking everyone else," Gilliam said. "If you do it that way you don't have to worry about one particular checker being dishonest."

And if that isn't enough, there is a triple check on the cash.

"We take all the money, we put it in the safe, and the next morning another person who was not involved last night, when we closed out, checks the money again."

Gilliam has did not mince words when talking about his predecessor. But while he believes Riddick and the others charged in this case were dishonest, he notes that were dedicated public servants in the office who rooted out the crime.

"They concluded that Laura Riddick was probably stealing money," Gilliam said. "They conducted an investigation and gathered evidence to prove that she was stealing money and then they reported that."

Gilliam also said Wake County citizens no longer have to worry about misuse of tax money in the Register of Deeds office.