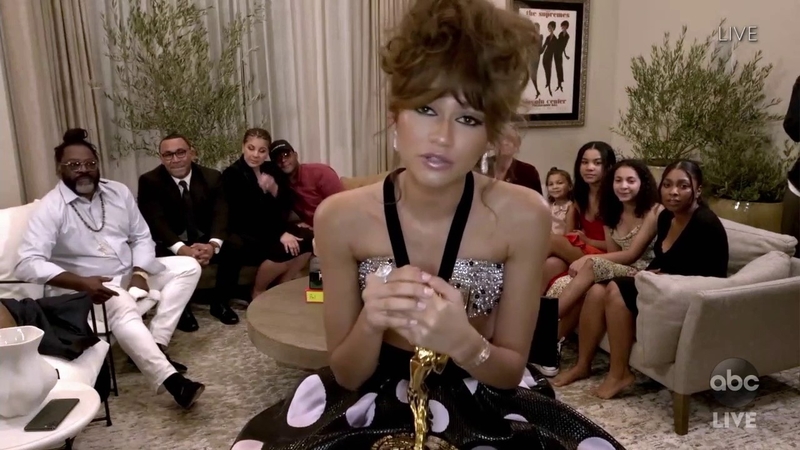 LOS ANGELES -- Stars and showrunners may not have a red carpet for the Emmys, but that isn't stopping them from looking their socially-distant best!

The 72nd primetime Emmy Awards are virtual due to the coronavirus pandemic, so 130 nominees have cameras set up at home or elsewhere in 10 countries and 20 cities.

"Euphoria" star Zendaya dazzled in a purple Christopher John Rogers dress that she showed off on her Instagram story. She paired the outfit with Louboutin heels and Bulgari jewelry, according to her post.

The 24-year-old was later seen wearing a sparkly and polka-dotted two-piece when she accepted her Emmy for best actress in a drama for her "Euphoria" role, becoming the youngest ever to do so.

Jennifer Aniston saved her look for primetime, wearing a full-length black dress. The "Morning Show" actress posted a photo of herself earlier in a robe and face mask, relaxing with a flute of champagne.

King, who won the Emmy for her role in "Watchmen," sported a black T-shirt that read "say her name" above a picture of Taylor. Aduba, who's performance in "Mrs. America" won her the Emmy, donned a shirt with "Breonna Taylor" written in gold script.

Watch Regina King accept the Emmy Award for Outstanding Lead Actress In A Limited Series Or Movie for "Watchmen" on Sunday, Sept. 20.

"Dead to Me's" Christina Applegate hasn't shown off her Emmys-from-home flare, but the actress joked that "we will all be in a fancy top and a sweatpant."

In the midst of all this madness and sadness, tonight we have the Emmys. Where we will all be in a fancy top and a sweatpant. Good luck @jimmykimmel I adore you. Hope it all goes well. Xo

Jameela Jamil admitted that she'll channel her "Good Place" character Tahani by wearing makeup and a sequin gown, but "no bra" and "no heels" is her "kind of vibes."

The cast of "Schitt's Creek" posed for photos of their looks from Toronto, where the show's cast and crew are gathering for a celebration "adhering to Ontario's COVID-19 guidelines." Eugene Levy wore a grey suit, while son Dan Levy sported a grey blazer with a grey kilt.

📢 | Tonight, some Schitt’s Creek cast and nominated team members have been able to gather for an #Emmys event in Toronto, adhering to Ontario’s COVID-19 guidelines. All in attendance have been in isolation since returning negative COVID-19 tests. Good luck, team! 💛

Jeremy Pope also kept it in the family. The "Hollywood" actor donned a checked suit and posed with his mom for a picture posted to Twitter.