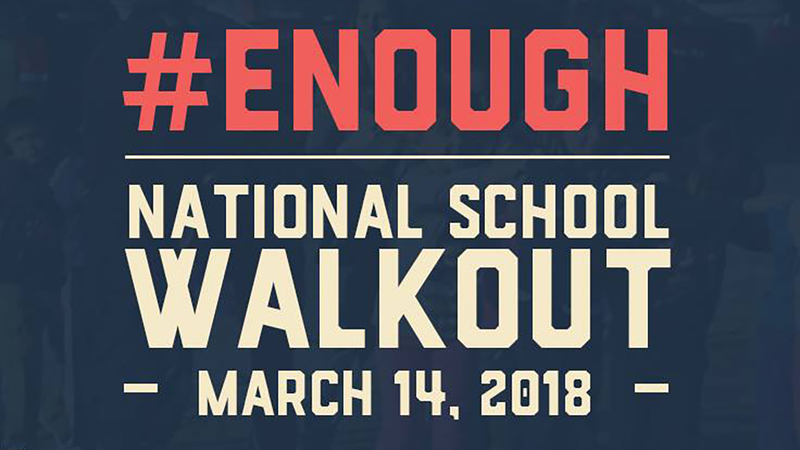 As the nation grapples with yet another fatal school shooting, one group is encouraging students and teachers to demand Congressional action to prevent future gun violence in schools.

Organized by the same group behind the Women's March, the #Enough! National School Walkout encourages students, teachers, school administrators and parents to take part in a protest at 10 a.m. local time on March 14, 2018. The walkout will last 17 minutes, a nod to the 17 lives lost at Marjory Stoneman Douglas High School on Feb. 14.

"We are not safe at school. We are not safe in our cities and towns. Congress must take meaningful action to keep us safe and pass federal gun reform legislation that [addresses] the public health crisis of gun violence. We want Congress to pay attention and take note: many of us will vote this November and many others will join in 2020," the group wrote on their Facebook event, which has more than 10,000 interested attendees.

While the Enough walkout from the Women's March appears to be the most organized, plans for several other similar demonstrations are circulating on social media.

A group that identifies itself on Twitter as Student Walkout Against Gun Violence said a walkout has been planned for Wednesday, one week after the shooting.

CALLING ALL STUDENTS🗣
The walkout this week will be held on Wed., February 21st at noon!
Students across the nation will stand with students in Broward County, FL.
Two other walkouts will be held in months to come, so I will keep you updated.
Change isn’t coming; it is here. pic.twitter.com/c2zYSyXHJg

Another demonstration that seemingly originated on Reddit and was later popularized on Twitter will take place on April 20, the anniversary of the 1999 Columbine shooting.

On Friday, April 20th we want students to attend school and then promptly WALK-OUT at 10:00 am. Sit outside your schools and peacefully protest. Make some noise. Voice your thoughts. "We are students, we are victims, we are change."

"On Friday, April 20th we want students to attend school and then promptly WALK-OUT at 10:00 am. Sit outside your schools and peacefully protest. Make some noise. Voice your thoughts. 'We are students, we are victims, we are change,'" National School Walkout wrote on Twitter.

During that demonstration, students are encouraged to wear orange as an homage to the Wear Orange campaign associated with National Gun Violence Day.

Aside from the walk-outs, survivors of the Parkland shooting are organizing an event on March 24 called March for Our Lives. Student Cameron Kasky explained what inspired the event's name to ABC News.

"People are saying that it's not time to talk about gun control. And we can respect that," he said. "Here's a time. March 24th in every single city. We are going to be marching together as students begging for our lives."

The teens organizing the march, such Emma Gonzalez, said they are hoping politicians will have a conversation with survivors of the Parkland shooting.