WTVD
By Jennifer Matarese
NEW YORK -- Is someone on "The Bachelor" a workin' girl? No, it's not Melanie Griffith, it's one of the new women vying for Matt James' heart. The rumors do not appear to be true, but the rumor mill can be nasty. Before we could find out more about that, the show snapped us back to right after Sarah had left the show.

The women were bashing Sarah after she had left the show and Katie asked everyone to stop. Victoria lashed out and said that she would do whatever she wanted and Katie should shut up. Later, Victoria tried to demand an apology from Katie and she wasn't going to get one.

End of Group Date
Matt still had a group date to continue after Sarah decided to leave. He seemed to be doing ok and spent one-on-one time with each of the women to try to further his relationship with each of them. A big theme of the conversations was the women asking him if he was ok emotionally after Sarah left. He seems shockingly fine. Chloe showed Matt a picture of her with hair before she decided to shave it off. Matt told her every time she walks in the room is a "wow" moment. They seemed to really connect. She got the group date rose!

Cocktail Party
During the cocktail party before the rose ceremony, Katie used her time with Matt smartly and seemed only to talk about their relationship. Victoria started off complaining to Matt that she worried about not having enough time with him. Suddenly, Chris Harrison showed up and stole Matt away for an urgent matter. The women worried that Sarah might come back, but Chris told Matt that a record number of women applied to be on the show. They brought in five new ladies! Matt was shocked and definitely caught off guard. 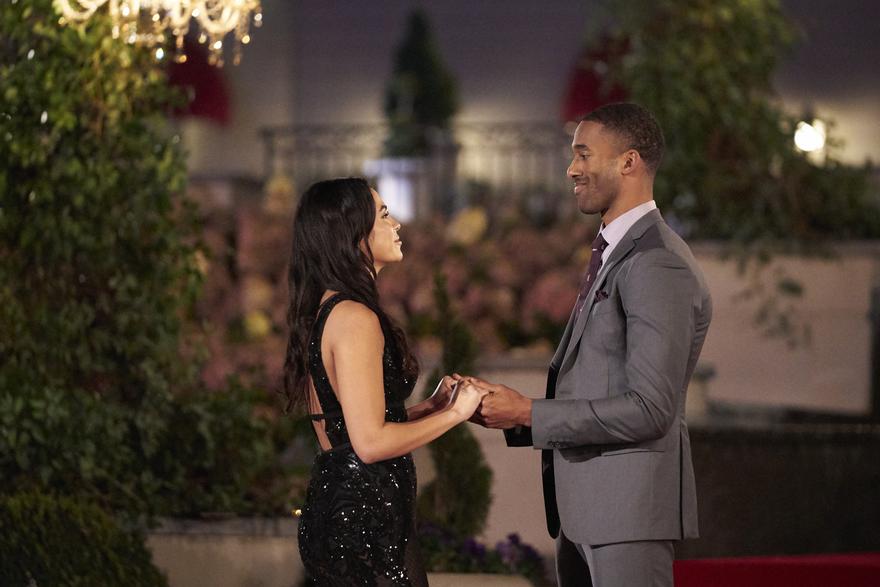 Brittany is a 23-year-old model from Chicago who just started kissing him to "make up for lost time." She told the existing bachelorettes that a few others were coming. They asked her if she was a backup because Sarah left and she said, "No, they wanted to save the best for last." 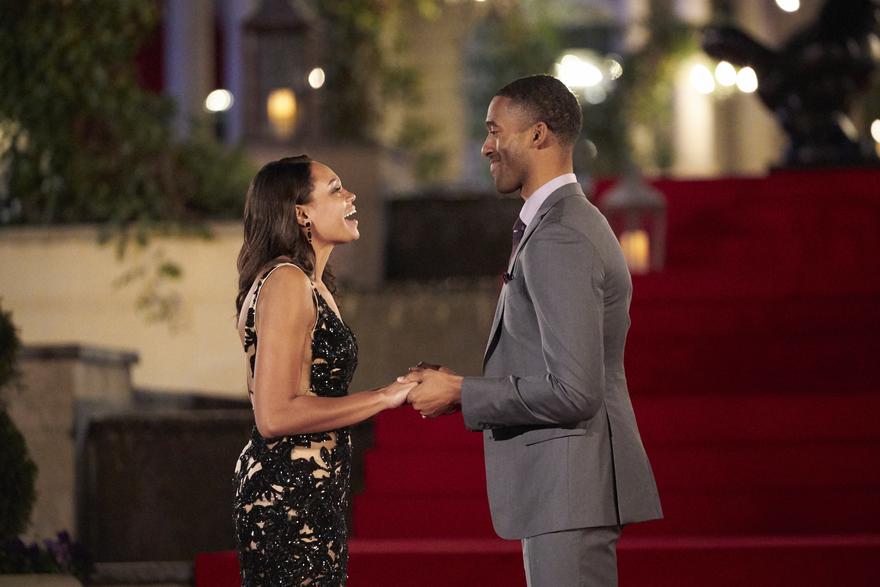 Michelle is a 27-year-old teacher from Minnesota. She seemed very sweet and had a very classy entrance. She talked about where she was from and that she was just excited to be there. 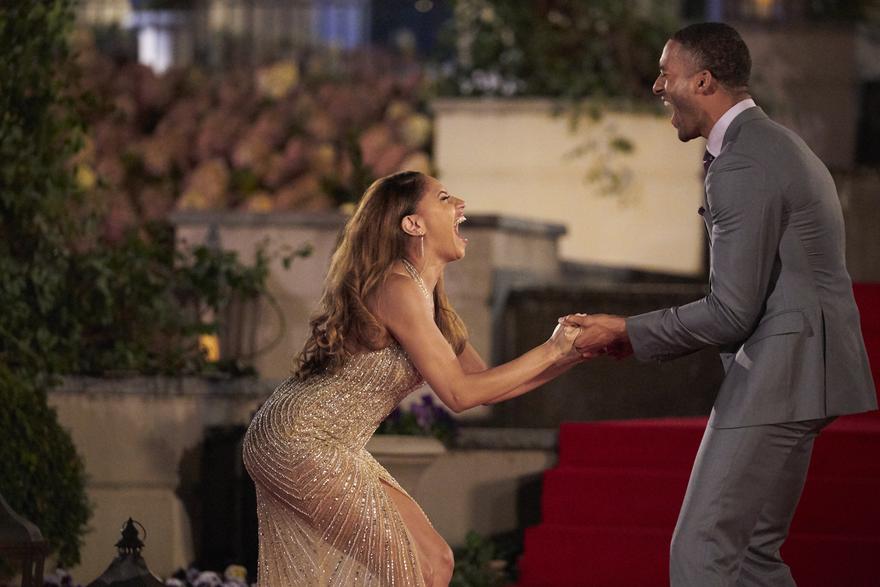 Ryan is a 26-year-old choreographer from Brooklyn. We didn't get to see very much of her entrance. 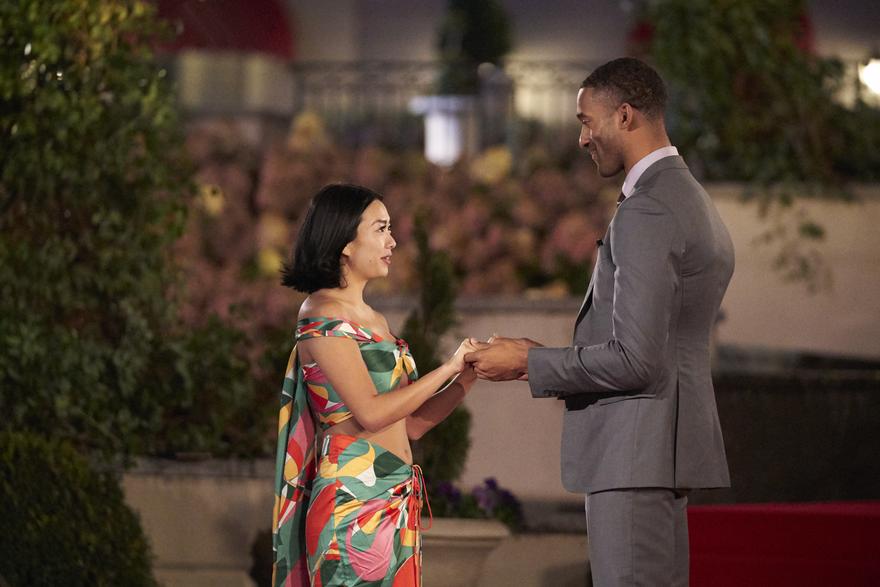 Kim is a 28-year-old ICU nurse from Los Angeles. She came into the room full of women very positive and without hostility. 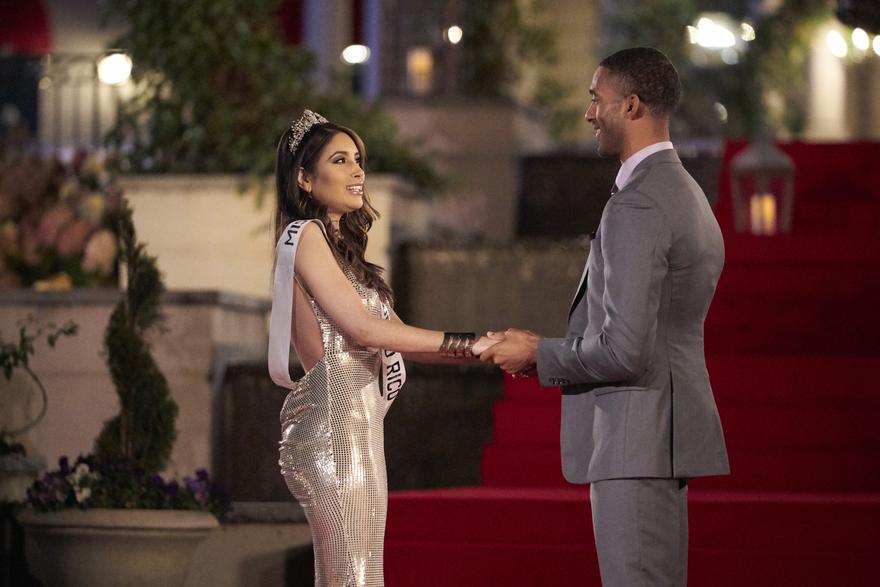 Catalina is 29 years old and a former Miss Puerto Rico. She told Matt that she is a former Miss Puerto Rico Universe as well and now she wants to be the queen of his universe. Victoria was upset because there was another "queen" in the house. Victoria told Catalina that she's the queen, and she wants to wear her crown. So, she took it! Catalina was a little confused by Victoria. 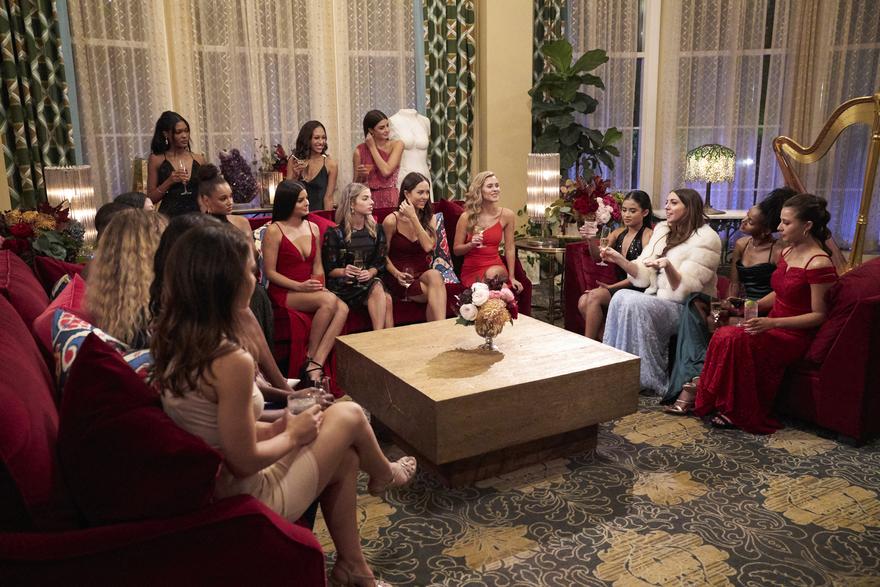 The group of OGs is upset that new women are there and more of their time will be disappearing. Matt did his best to welcome the new ladies and told them that he's looking forward to getting to know them. Victoria jumped up right away to ask Matt if they could finish their conversation. Anna recognized Brittany, one of the new arrivals, from the Chicago club scene. Speaking of, Brittany decided to stand nearby and grab Matt as soon as he was done talking to Victoria. Understandably, Matt had to get to know the new arrivals, but it made the OGs nervous. 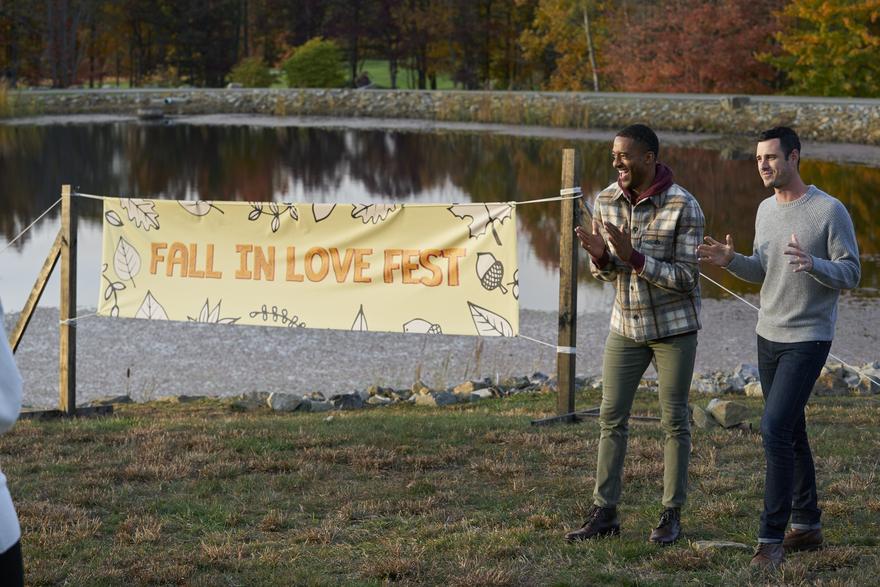 The date card read, "Mari, Bri, Abigail, Brittany, Ryan, Catalina, Magi, Anna, Victoria, Let's fall in love." Before he left for his group date, Former "Bachelor Ben Higgins stopped by. Matt told Ben that he's happy the new women are there but it's hard leaving a rose ceremony with more women than he was expecting. He worries about the OGs getting along with the new ones. Ben said that Matt just has to stay open to love and go with the flow. Ben and Matt met up with the ladies for them to do a "Fall in Love" challenge. They had to row in pumpkins, dress like squirrels and race around to the finish line.

During the after-party, he pulled Anna aside to talk and Brittany tried to interrupt her. Anna had barely opened her mouth. It was hard for Anna to regroup because Brittany was always hovering nearby. She left with a chip on her shoulder. She started talking to the other OGs to gripe. Anna said that she has heard rumors that she "entertains men for money." Anna also said her DMs read, "Watch out for this girl." It is just a rumor.

Matt told Brittany that the first kiss right out of the limo was hot. They did a lot more kissing. Bri and Matt continued their connection and he told her she looked good in the squirrel costume. In the end, the group date rose went to Bri!

After Matt left, Anna asked Brittany if she was there for the right reasons. She revealed the messages she got and that they said she was an escort. Anna admitted, "That's an awful thing to say about someone, so I apologize, " but then asked her if she wanted to explain. Brittany said she is not an escort and she was upset that she was being judged without anyone taking the time to know her.

One-on-One Date
To add fuel to the fire, a newbie got this week's one-on-one date! "Michelle, Let's make up for lost time," the date card read. Michelle was so excited she would be getting so much time with Matt. He said he felt a connection and he wants to explore that with her. Their date was an extreme scavenger hunt organized by Chris Harrison. They rappelled down a ski lift to a bunch of balloons with the next clue. They popped the balloons, which were all full of icebreaker questions. Then, they spotted a hot air balloon! They took their new relationship to new heights. They kissed! Matt said it felt like he knew her for much longer than he actually did.

That evening, they had dinner inside of a garage full of classic cars. Michelle talked about how much she loves being a teacher and about how COVID has made teaching a challenge. She also said that the George Floyd situation was very tough on her students as well. She said the parents of her students wanted to have a conversation about it and she appreciated that. "The work you are doing will shape a generation," Matt said. Michelle said that she admired Matt's work with children and closing the achievement gap. They both seem to care deeply about helping children and making a difference in the world. They are fantastic together. "You embody all the qualities that I am looking for in a woman," Matt said as he offered Michelle the date rose. She happily accepted!

Second Group Date
Back at the hotel, Brittany appealed to Katie about how upset she was about being called an escort. She said it wasn't true, and Katie believed her. She was upset that Victoria and Anna are being "mean girls." 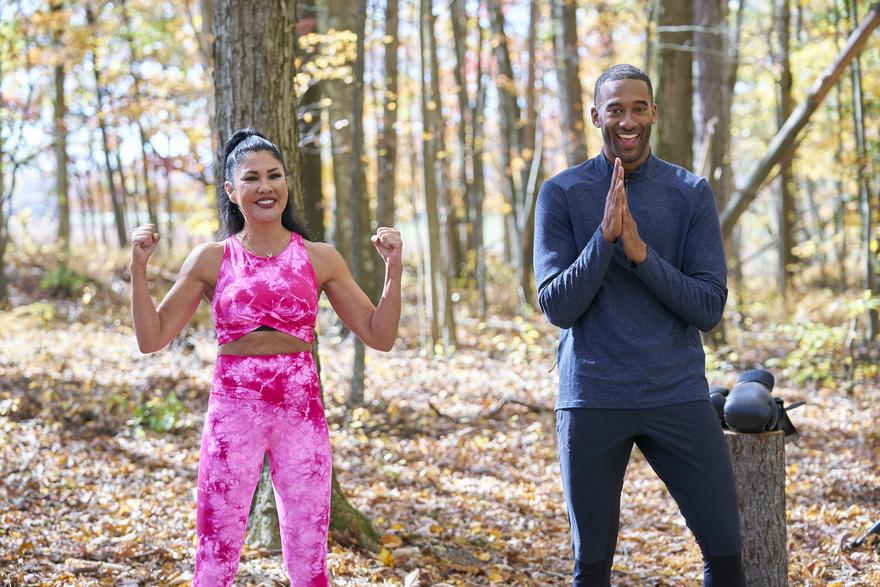 The date card read, "Katie, Pieper, Serena P., Rachael, Kit, Chelsea, Jessenia, Lauren, Serena C., MJ, Are you willing to fight for love?" They met Matt in the woods along with Mia St. John, a five-time world champion boxer. They practiced some boxing and learned techniques from Mia. 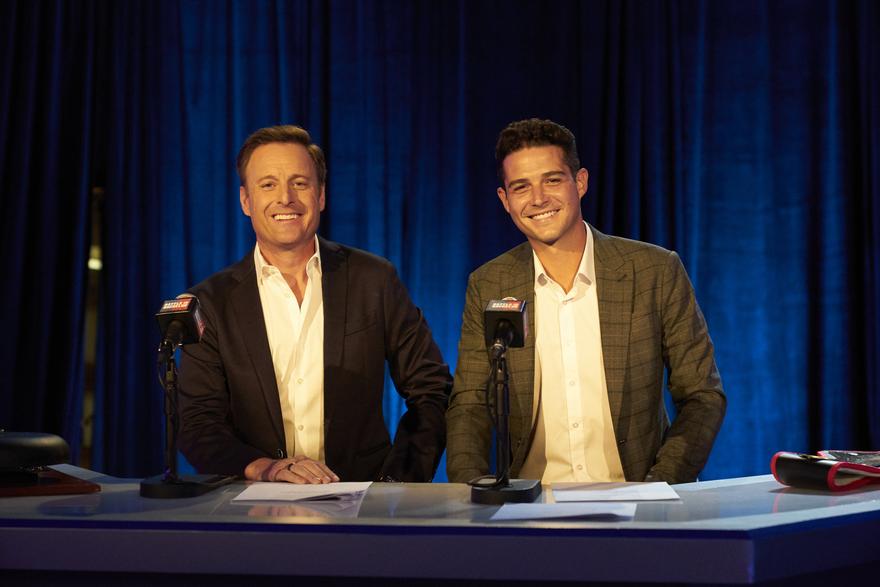 Then, Wells Adams appeared alongside Chris Harrison to do the play-by-play of a boxing match inside of a real ring. Serena P. got punched in the nose, there was no final winner, but Matt thought it got a little too intense.

Katie found Matt and told him that people are calling one of the new girls an escort and it could ruin their lives. She asked Matt if he could address the room and ask them to be respectful of each other. Matt said that he's shocked and he doesn't want anyone's life ruined by being on this show. "Someone thinks they can bully their way to my heart, that's not how it works," Matt said.

Next Week
Matt gives the women a talking to. Victoria and Anna break down in tears over their comments. Will they be sent home? 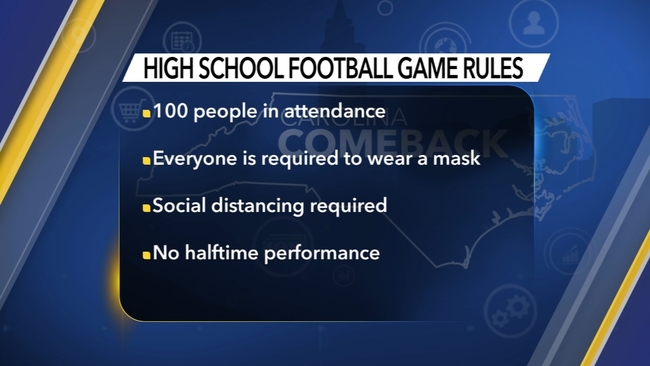