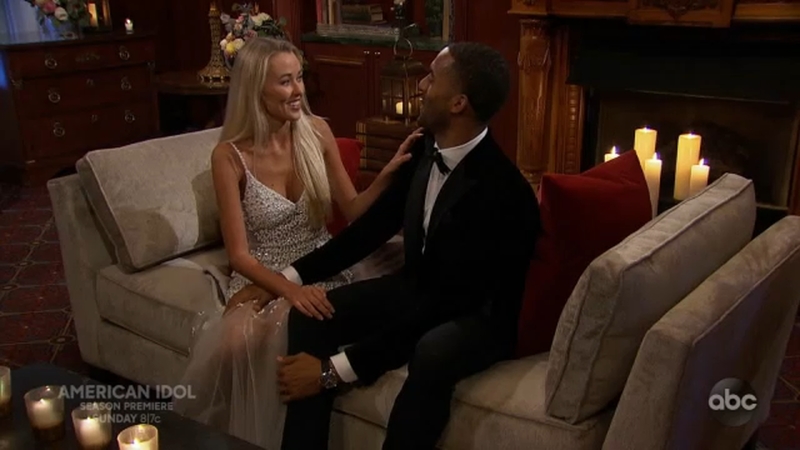 NEW YORK -- This week picked back up with MJ and Jessenia's two-on-one date with Matt after bullying behavior spread throughout "The Bachelor." Matt wanted to put a stop to it and he figured the best way to do this was to put the alleged bully against one of her accusers. Matt started the two-on-one conversation by talking to Jessenia and getting her side of the story. She told Matt that MJ was one of the core people who started the bullying and that everything she has done has "come from a place of malice." MJ told Matt that she has a big heart and she has been trying to show him that every second she is with him. She tried her best to tell him that she's just trying to bring everyone together. She said she feels very hurt by the situation. Matt decided to walk MJ out. She got into the limo without saying a word to him. "I just can't believe this happened. He's still a great guy, it's disappointing that he didn't see it in me," MJ said. Jessenia walked back into the group of women holding the rose.

Roses for the real ones 🌹 #TheBachelor pic.twitter.com/5Uj5HhJUCs

Chris Harrison walked into the room and told the women that there would be no cocktail party that evening. He wanted to move directly into the rose ceremony. Serena C. lashed out at Katie for telling Matt about the drama. Matt gave roses to:

11) Serena C.
That meant that Ryan, Magi, and Brittany were eliminated.

Katie vs. Serena C.
Katie asked Serena C. for an apology. They went back and forth, about who was there for the right reasons. Katie said that she never told Matt anyone's names when it came to the bullying. Serena told Katie that she wasn't focused enough on Matt. They screamed at each other a good amount. "Thank you for your feedback," Katie said before running off. Serena C. was saying that Katie said she wasn't there for Matt to the other women, and Katie went downstairs and defended herself. Kit just asked them to stop screaming at each other and being ridiculous.

Appreciation post for Katie’s 🔥 commentary since night one #TheBachelor pic.twitter.com/jUSyTU31jM

Heather Martin Arrives
Heather Martin, from Colton's season, suddenly showed up to talk to Chris Harrison. You remember her right? She had never been kiss, until Colton kissed her. So now she has been kissed. The guard wouldn't initially let her in, so Chris Harrison came out to talk to her. She claims that Hannah told her to show up and try to meet him. Chris told her they are nearly half way through the experience. Chris told her that he's going to some executives and such and they will "see what we can do."

One-on-One Date with Pieper
"Pieper tonight will be worth the wait," her date card read. Matt drove Pieper into the woods, in the dark, and then gave her a lantern. They walked over to a big light switch that they flipped and suddenly, there was a big carnival just for them. This made me miss carnivals! They played games, got the good prizes, and went on whatever rides they wanted as many times as they wanted to. They seemed to really enjoy each other's company! There was a lot of kissing!

After they were done riding the rides, Pieper and Matt sat down for a quiet meal together inside. She said that the past week was hard, having so much time to reflect on her feelings. She says that it was seen as a bit weak in her family. Pieper said that her family doesn't really say "love" it's all through actions. It's not necessarily how she wants it, but it was how she was brought up. She says that she wishes her mom would say she was proud of her more and say it out loud that she loves her, because sometimes you need the worlds. Matt said that he's struggled with that as well. Pieper took that as her opening to say, "Matt I'm falling in love with you." He promised to be open with his feelings and emotions as well. With that, he took the rose and offered it to her. She happily accepted.

had the time of our lives performing our new single “Everything I Love” on @BachelorABC. can’t wait to follow the rest of @mattjames919’s journey. get our song now at https://t.co/EomztmXLYw 🌹 @BachNation #TheBachelor pic.twitter.com/15tUjyL20A

Matt said he had one more surprise for her and it was the band "Temecula Road." They were there to perform for Pieper and Matt as they danced and kissed. They had a great time and said it was a magical night!

"Bri, Kit, Rachael, Michelle, Jessenia, Serena P., Abigail, Chelsea, and Serena C., This lane leads to love," the date card read. Chris Harrison announced that it would be a bowling competition and the losing team would go back to the hotel, the winners would get to advance to the evening portion of the date where a group date rose would be on the line. The blue team lost with most of Matt's top ladies. Abigail, Rachael, Kit, Bri, and Serena C had to go back. Serena P., Chelsea, Jessenia, and Michelle went on to the cocktail party. But - it was short lived. Matt sent the blue team a date card that said, "I feel terrible about today, please come to the cocktail party."

When you’re so love struck by Matt 😉🎳 #TheBachelor pic.twitter.com/ux3wA4y2Me

That evening, Matt started off by having some meaningful time with Michelle where their relationship seemed to move forward. The other women were upset to see the blue team show up right after Michelle and Matt returned from their talk. But them Matt heard from Serena P. that she is falling for him and he told Chelsea he could see himself with her. In the end, he decided to give the group date rose to Michelle!

This friendship is everything we’ve ever needed 😍 #TheBachelor @TylerJCameron3 pic.twitter.com/I947V7mXtY

One-on-One Date with Katie
Matt took Katie to the spa to spend the day there. He added that Tyler C. was there and also going to be getting a massage so, the two of them were going to be in an earpiece of the masseuse and they would ruin his massage. They were so funny! They had the masseuse twisting Tyler's nipples. Then they had her use the rolling device really hard and using it on his head, shoving his head down. Tyler had a rough massage! Then they had Katie pretend to be the masseuse's friend and talk about who she was massaging, and then they actually joined in the massage and shocked Tyler completely! It was really funny!

RT if this is your idea of the perfect date 🤣 #TheBachelor pic.twitter.com/nwfQpp1h05

At dinner, Matt and Katie sat in a pink room where they could get to know each other, with all kidding aside. Katie said that she had a great day and that she was so glad he picked her for that date. Matt asked her what her past relationships were like. She said that she was missing someone who was playful. Her last long-term relationship was three years and she said she thought he was going to be the one, but she realized she wasn't being who she was meant to be. Katie said she wants to meet someone who accepts her for who she is. She told Matt that she is committed and she can see the process continuing. "I'm here to the end if you want me to be," Katie said. Matt picked up the date rose, and said that he thinks back to the way they met and how much their relationship has grown and how she has set the tone for the other women and for him as well. He added that he appreciates her, but he said he owed it to her to be honest and he said that his relationship with other women in the house has progressed further than theirs had at that point, so he couldn't give her the rose. "I haven't had those feelings that I need to have when it comes to finding a wife in this process," Matt said in regard to her. Matt said he knew that she was an incredible woman, but he couldn't see her as his wife. "I just didn't see that coming at all," she said. Neither did we girl, neither did we.

Fresh out of quarantine & ready for Matt 😳👋 #TheBachelor pic.twitter.com/Wb5OJ1w3bv

The remaining women all assembled for a cocktail party, and Abigail was happy that Matt took her aside to speak first. He wanted to make sure that she knew he was still excited to see her. He continued to further his connections with the remaining 10 women, but then, Heather Martin arrived! She was sure to shake things up! She gave the other women a little wave and walked in and interrupted Matt and Pieper's time. Matt started laughing and couldn't stop! "Pieper I am so sorry, I just need a couple minutes, I'll be right back," he told her. Pieper stormed out and was like, "Who the *bleep* is that?" Heather and Matt both said they felt like they were in a dream, and Heather told him the story of why she was there and why he should give her a shot. "If she gets a rose tonight, I'll be rageful," Serena P. said.