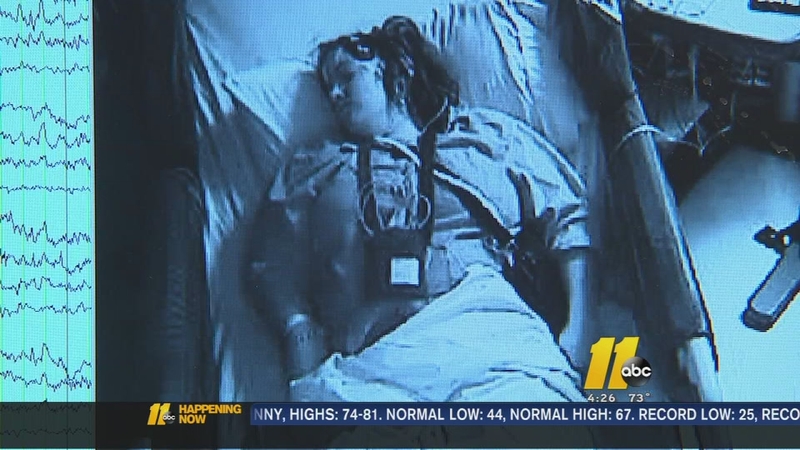 DURHAM (WTVD) -- 1 in 13 people will experience a seizure by the time they're 70, and a third of those will go on to have a second one, leading to a diagnosis of Epilepsy. It's facts like these that patients and doctors are sharing in the hopes of shedding light on the disease as part of Epilepsy Awareness Month.

Rebekah Bass was 23 when out of the blue she experienced her first seizure.

"My parents had to call the paramedics one morning because I had fallen in the kitchen and hit my head," she recalled.

Tests would later confirm that it, the first of many seizures she'd continue to have going forward, was epilepsy.

"Epilepsy is actually a fairly broad term, but the big thing that (different types have) in common is that it involves abnormal electrical activity in the brain," explained Bass's at Duke University Medical Center, Saurabh Sinha, M.D., PhD.

"Nerve cells talk to each other all the time by firing little electrical impulses," he went on to detail. "During a seizure a group of nerve cells starts firing very rapidly all at the same time. Because different parts of the brain do different things seizures can actually look quite different. In the extreme, where the whole brain is involved, you get the impressive grand mal seizure where someone stiffens and the whole body shakes and jerks. But if it's a smaller part of the brain that is involved, a seizure can be as simple as a funny feeling, confusion, staring off, turning their head in the wrong direction, shaking a small part of their body."

In Rebekah's case, her seizures would often take on a variety of forms.

"I was continuing to have gran mals. I was having complex partial seizures which are ones where you might just pick at your clothing and do a repetitive motion or start to stutter," she shared.

And sometimes her seizures would be as subtle as her covering her mouth, seemingly embarrassed by something, and pausing as if she was looking for the right words. The problem was, that even with these very minor occurrences, they would sometimes happen in clusters, one after another, until she'd make it to an emergency room where they'd administer medicine through an IV.

And one particularly bad episode while she was at work as a paralegal left her turning blue, unable to breathe, and scared her coworkers so badly that she eventually realized she could no longer work. The same went for driving, since patients with epilepsy never know when another seizure will strike. She went through 13 different medications, trying to hold the seizures at bay, but nothing worked. That's when Dr. Sinha and his team decided to proceed with a craniotomy.

As Dr. Sinha explained, this involved first cutting off a part of her skull and placing electrodes directly on the brain to try to track the source of the seizures. After monitoring her in the midst of her seizures, they determined the seizures appeared to be originating from a certain area at the front of her brain, so they removed a small part of that. Unfortunately, it didn't stop her seizures completely, but it has decreased their frequency and severity.

Meanwhile, Rebekah is trying to share her story and educate others about epilepsy in the hopes of increasing awareness of the disease. She even put together an informative binder and handed it out to her local law enforcement and first responders so they'd know more about the signs to look for if they responded to a call for her or another patient. It's an idea she got after attending a seminar Duke hosted on epilepsy that they're putting on again this weekend. Dr. Sinha says the point is to further educate patients and their loved ones and caregivers.

"What we try to encourage in the community, if you have a patient with epilepsy who's not doing as well as they should be, meaning they're still having seizures or side effects or problems, that they really get referred on to a specialist to at least take a look at them and see what's available," he said.

In most cases, it will mean getting on the right medication or combinations of medications. It's much rarer that doctors will pursue surgical options like they did for Rebekah. In fact, although Duke gets lots of referrals to its neuroscience clinic, they still only perform 40-50 of those procedures a year. Still, the fact that they have different tools at their disposal is something that gives patients like Rebekah hope that one day they'll find the right combination to allow her to go back to living a more "normal" life.

This weekend's seminar: "Living with Epilepsy IX: Life without Limits," an all-day symposium for epilepsy patients, their families, and caregivers, will be held on Saturday, November 7, 2015 from 9 a.m. to 5 p.m. at the Friday Center in Chapel Hill. This symposium will feature epilepsy experts from within the Department of Neurology and elsewhere within the School of Medicine. Admission is free, and breakfast, snacks, and lunch will be provided. To register, visit https://www.dukemedicine.org/events/living-epilepsy-ix-life-without-limits-1446901200-1446933600 or call 888-ASK-DUKE (888-275-3853). For more information, contact Deborah Labell-Scarfo at deborah.labellescarfo@dm.duke.edu.