Lauren Hill remembered at arena where she made her layup 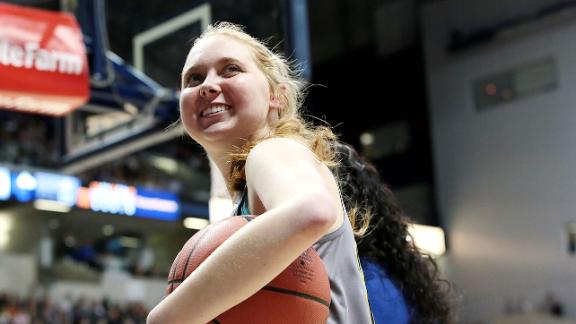 CINCINNATI -- Lauren Hill's gray, metal casket was wheeled into the 10,000-seat basketball arena and placed at the spot where she made her first basket only five months ago.


No more perfect place to remember her.


The 19-year-old college basketball player was memorialized on Monday with her own music and words in the arena where she had one of her greatest moments. Only this time, the crowd celebrated not a layup, but a life.


Hill died Friday from a brain tumor that had been growing inside of her for more than a year. The Mount St. Joseph freshman devoted her final year to playing basketball, raising money for cancer research, and inspiring others.


"She made you think: What am I doing with my life?" said Lexy Saraswate, 19, a Xavier student who volunteered to work at the memorial service. "How can I be a better person?"


Hill's casket was brought by a hearse to Xavier's Cintas Center, where she made a left-handed layup to open a Division III game on Nov. 2.


The public was invited to file past the closed casket in an upstairs conference room. A spray of white, pink and purple roses rested atop it.


Family photos flanked the casket, along with a photo of her in a cape and a quote from actor Christopher Reeve: "A hero is an ordinary individual who finds the strength to persevere in spite of overwhelming obstacles."


Then the casket was taken down to the arena for an hour-long memorial, resting on the spot where she made her famous layup. The backboard and basket were off to the side, with the attached game clock and shot clock set to 22 -- her number.


Coach Dan Benjamin gently kissed her gray No. 22 jersey before stretching it over the casket. Former teammates dabbed their eyes with tissues as they sat in folding chairs on the floor. A few thousand people stood silently in the stands.


At times, the only sound in the huge arena was sniffling.


"She has revealed to us that one person can make a difference," said Dr. Mariko DeWire, one of her physicians. "She truly is our victorious hero."


All along, Hill insisted that it wasn't about only the one layup. Or one game. Or one life, even. She tried to make her final year about everyone else.


"Just her courage," said Saraswate, who attended the game in November and cried. "I felt that was the thing: What do you do when you're staring death in the face? She set a goal for herself and accomplished it, even surpassed it. She's an inspiration."


Music from her iPod was played at the start of the memorial. The second song on her playlist: James Taylor's "You've Got A Friend."


There was video of the layup she made only 17 seconds into Mount St. Joseph's 66-55 win over Hiram College in the season-opening game that was moved up to Nov. 2 because of her declining condition.


One of her favorite songs -- Katy Perry's "Roar" -- was played as her casket was wheeled out to a standing ovation. She'll be buried in a private service on Wednesday.


Hill tried to make the last months of her life about helping and inspiring other people. Through a nonprofit foundation, she helped to raise roughly $1.5 million for research into pediatric cancer. Shortly before she died, she set a goal of raising $2.2 million -- matching her uniform number.


The fundraising campaign will continue through the school and the foundation.


Hill was a high school senior in nearby Lawrenceburg, Indiana, when she started having dizzy spells. Tests found the inoperable brain tumor. She decided to attend college anyway, hoping to live long enough to get into a game.


The NCAA recognized her condition and allowed the school to move up the opener. The great interest in the game prompted Xavier to host it.


The arena was packed for the game, which started with a set play to get her a left-handed layup. She also made a right-handed layup late in the game. Each time, there was another roar followed by more goose bumps and tears.


She played in four games overall, scoring 10 points, before she was too weak to continue.


Before the season started, the U.S. Basketball Writers Association voted her the Pat Summitt Most Courageous Award, which is normally awarded at the Final Four. The honor was noted again at the women's Final Four a week ago.


Her courage and humor were celebrated at the memorial on Monday.


"Lauren chose to be the victor," said the Rev. Corey Potts from her church in Indiana. "When she was in the hospital, I went to see Lauren expecting to cheer her up. And she cheered me up."