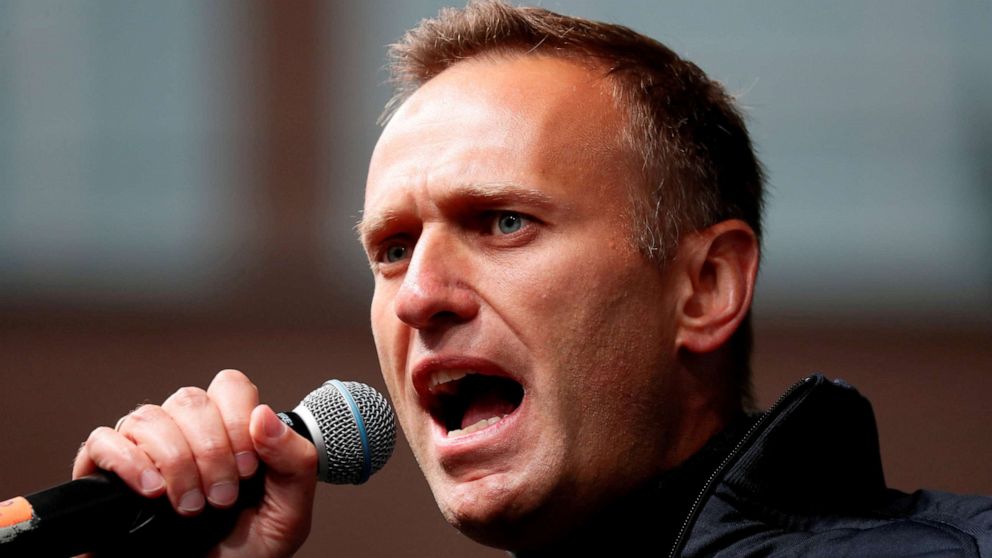 The European Union has sanctioned six senior Russian officials for the poisoning of Russian opposition leader Alexey Navalny with a nerve agent, laying the responsibility for the alleged assassination attempt directly on the office of President Vladimir Putin.

The European Council published the list of sanctioned officials on Thursday that included two of the most senior officials inside Putin's presidential office, as well as the head of Russia's domestic intelligence agency, the Federal Security Service or the FSB.

Navalny spent almost three weeks in a coma after he fell sick during a flight from Siberia in mid-August. After he was airlifted to Berlin for treatment, Germany said it found Navalny had been poisoned with a "Novichok" nerve agent, a type of chemical weapon developed by the Soviet Union and used in the poisoning of the former Russian double agent Sergey Skripal in Britain in 2018.

Germany and other Western countries, including the United States, had demanded an explanation from Russia, warning there must be consequences for the use of a chemical weapon against a Russian opposition figure.

The EU sanctions announced on Wednesday are remarkable because they lay the blame for Navalny's poisoning directly with top officials within Putin's presidential office and accuse it of overseeing a campaign to discredit the opposition leader. Among those listed are Andrey Yarin, the head of the "Presidential Domestic Policy Directorate" and Sergey Kiriyenko, Putin's first deputy chief of staff, both figures known to be tasked with managing the Kremlin's control of Russia's domestic political scene.

The sanctions document published by the European Council alleged that a "task force" had been set up within Putin's presidential office, led by Yarin, "whose role was to counter Alexei Navalny's influence in Russian society including through operations meant to discredit him."

"Alexei Navalny has been the target of systematic harassment and repression by State and judicial actors in the Russian Federation due to his prominent role in the political opposition," the document reads. It added that a Novichok nerve agent is accessible only to Russian state authorities.

"In these circumstances, it is reasonable to conclude that the poisoning of Alexei Navalny was only possible with the consent of the Presidential Executive Office," the entries designating Yarin and Kiriyenko read.

Navalny is Russia's best-known opposition leader, who has built a grassroots following primarily through investigations exposing alleged corruption among powerful Russians, including top officials. He and his colleagues have faced harassment and detention for years, and his team has blamed his poisoning directly on Putin.

Russia has denied any involvement in Navalny's poisoning and Russian officials have sought to cast doubt on the idea that he was poisoned or have suggested he could have been poisoned in Germany. The Kremlin's spokesman Dmitry Peskov on Wednesday called the EU sanctions an "unfriendly step," telling reporters it harms relations with Russia. Peskov also denied that a task force to discredit Navalny existed within the presidential office.

"On the whole, the decision to make relations between the European Union and Moscow dependent on this person, whom Europe sees as the leader of some sort of opposition, can evoke only regret," Peskov said.

Russia's foreign ministry spokeswoman Maria Zakharova on Wednesday pledged the country would respond and said EU's explanations for the sanctions "bordered on the absurd"." Foreign minister Sergey Lavrov earlier this week said if sanctions were imposed Russia would reply with "reciprocal" measures.

A third top official, Sergey Menyailo, Putin's special to the Siberian Federal District that includes Tomsk the city where Navalny was poisoned, is also included on the blacklist, described as "responsible for inducing and providing support to the persons" involved in the poisoning.

The EU sanctions also said Alexander Bortnikov, the head of the FSB intelligence service, is responsible for "providing support" to those who poisoned Navalny. The documents said that given the use of a Novichok nerve agent and that Navalny "had been under surveillance at the time," it was concluded "that the poisoning was only possible with the involvement" of the FSB.

Two deputy defense ministers, Pavel Popov and Aleksey Krivoruchko, were also sanctioned, described as being responsible for Russia's military armaments and overseeing the destruction of its chemical weapons stockpile that ought to have been decommissioned after Russia joined the Chemical Weapons Convention.

"The use of such chemical weapons in the territory of the Russian Federation could only be as a result of intent or negligence by the Ministry of Defence and its political leadership," the sanctions document reads.

The EU also sanctioned the State Scientific Research Institute for Organic Chemistry and Technology (GosNIIOKhT), a chemical weapons lab in Moscow that it says helped develop Novichok nerve agents before 1994 and which it said must have failed in its responsibility to destroy the weapons.

The EU said it was imposing the sanctions in view of "the continued threat posed by the proliferation and use of chemical weapons."

Navalny is currently still in Germany, where he is still receiving rehabilitation treatment, having been released from the hospital last month.

Labs in France and Sweden have also confirmed his poisoning with a Novichok nerve agent. Navalny's team has said that traces of the nerve agent were found on a hotel water bottle found in his room in Tomsk, suggesting he was poisoned before leaving there for the airport. But they do not believe the bottle itself contained the poison since the amounts on it were tiny. So how exactly Navalny was exposed to the poison remains a mystery.

Russian authorities have refused to open a criminal investigation into Navalny's poisoning, while accusing Germany of failing to cooperate with them. In a phone call with France's president Emmanuel Macron last month, Putin suggested that Navalny could have poisoned himself, according to the French newspaper Le Monde.