WTVD
By Timothy Pulliam
RALEIGH, NC (WTVD) -- The family of Martin Bankhead said they are relieved that he has been found. But it's not the way they hoped.

Family members said they learned Saturday that authorities found the remains of the 61-year-old Raleigh man.

But they still have a lot of questions about how he wound up 200 miles away from his home without any of them knowing.

Marisha Davis, Bankhead's niece, said that is out of character for her uncle. 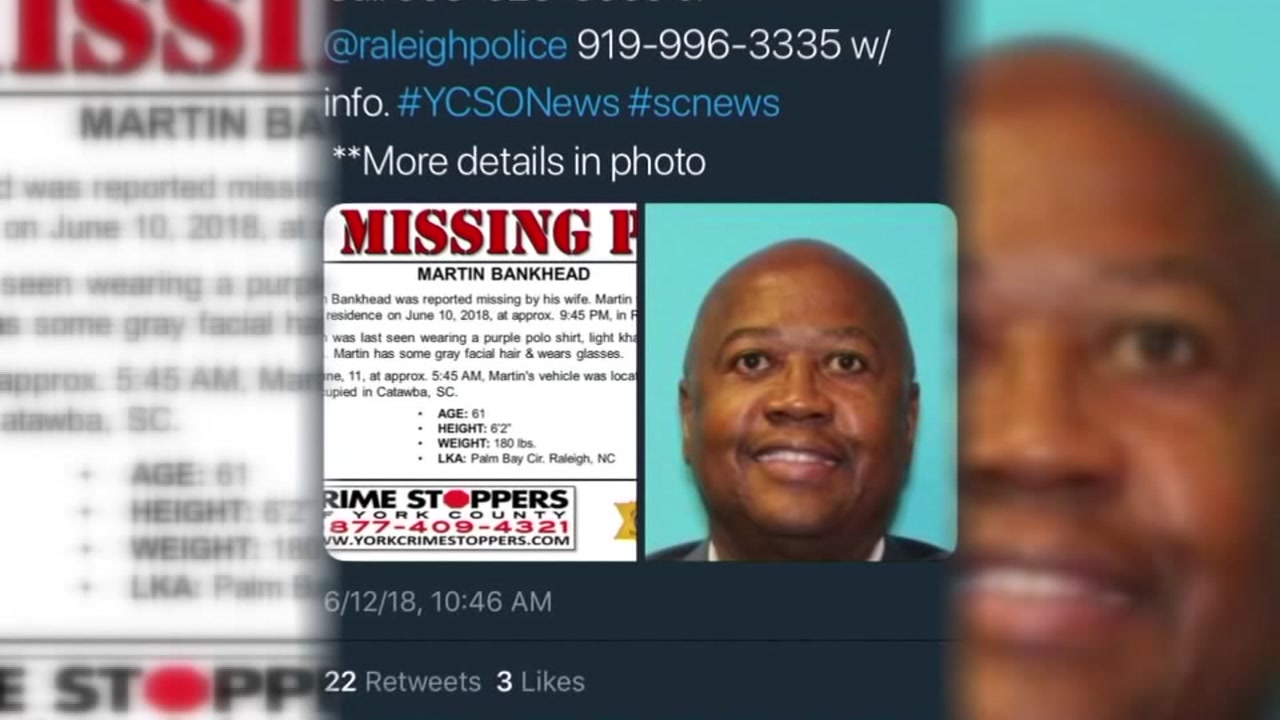 Missing Raleigh man's remains found in South Carolina
Authorities say remains discovered in Catawba, South Carolina are believed to be Martin Bankhead, of Raleigh, who had been missing since June.

"He never, never went anywhere without letting us know his whereabouts," Davis said. "It's unacceptable. Until I find answers I will never stop."

Authorities found his decomposed body in a wooded creek in South Carolina.

On June 10, Bankhead's wife called police from the couple's neighborhood in Brier Creek to report him missing.

The following day, approximately 200 miles away in South Carolina, officers found his car on train tracks with the door wide open and no one inside.

Investigators activated a search on foot and from the air, but it would take nearly three months to find Bankhead.

"As far as someone hurting him, I can't address that now because these questions haven't been answered," Davis said. "As far as the drones, the dogs, the search on foot and a horse? Like why if you scoped a thousand acres why was this not detected? Was he placed there after the fact? We're not saying anything was done incorrectly, we just have unanswered questions. I believe that there is someone that knows something."

As authorities investigate how Bankhead died, the family is pleading for the community to share what they may know about his disappearance and death.

"My uncle was Mr. Fix-It. And now I feel like I have to do it for him. I have to find out what happened, what occurred until I am satisfied," Davis said.

Bankhead retired from his engineering job and was separated from his wife, his family said.

He did not have any children, but family members said he was like a father figure and a mentor to many of them.

The family has hired a private investigator to help find answers.