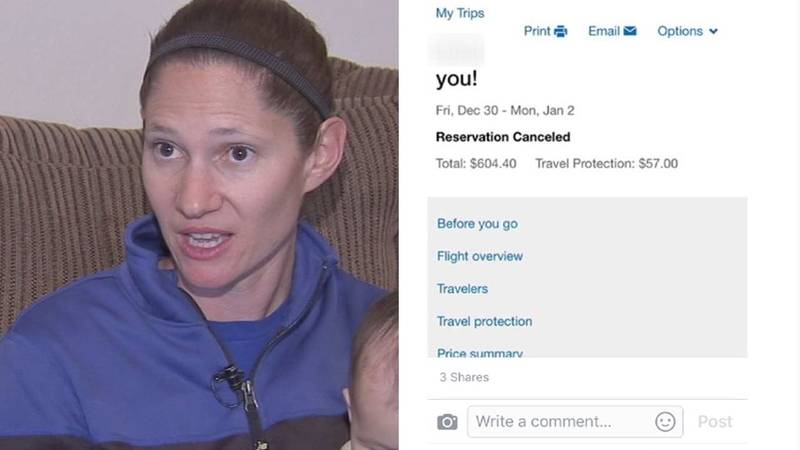 LOS ANGELES -- A Los Angeles woman claims she wrote a negative review of Expedia after a bad experience, and the company canceled her trip and wrote "f--- you!" on her itinerary.

Cara Viramontes has been looking forward to taking her 8-month-old son on a family vacation.

In September, she booked flights to Utah on Expedia for a trip in January. She ordered travel insurance but was puzzled when it included a fee for her baby.

"And I don't understand. He's not charged a ticket so why do I have to pay travel insurance for him?" Viramontes said.

When she called Expedia, Viramontes said she didn't get a satisfactory explanation. So when she was emailed a survey from the travel company about customer service, she gave a bad review.

"Two days later, I get an email that my flight is canceled," Viramontes said.

Viramontes says she made several calls to Expedia trying to figure out why her reservation was canceled but was not able to get through to anyone.

Monday, she opened up her itinerary online and was shocked to see a profane message.

"I'm like, unbelievable. I wonder - if I wrote a review, two days later my flight's canceled with an 'F-U' on the top of my itinerary," Viramontes said. "This sounds a little fishy."

When she finally was able to get an Expedia supervisor on the phone, he said records showed she had canceled her flights and she says he accused her of lying.

"It was an absolute nightmare," she said.

Frustrated by the situation, Viramontes posted her experience on Facebook. Expedia executives contacted her and rebooked her flights at no cost.

In a tweet, Expedia's CEO said, "Sometimes when you give individuals the power to do right by customers, they do wrong. We will make it right for Cara."