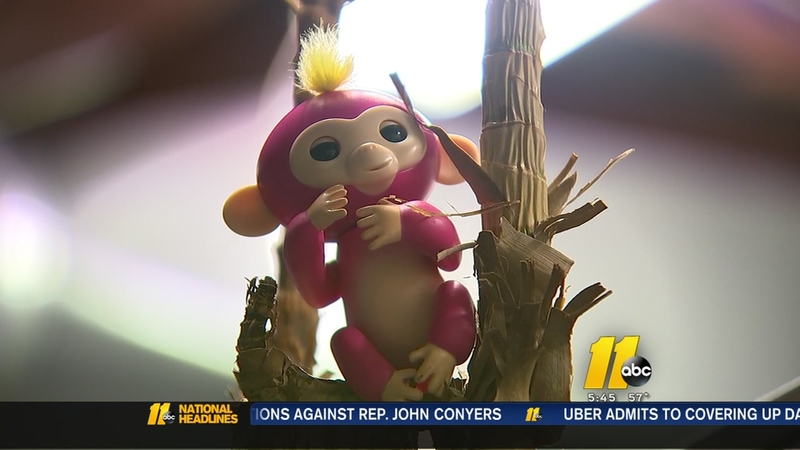 RALEIGH (WTVD) -- One of the hottest toys this holiday season is Fingerlings. The interactive baby monkeys are flying off the shelves and many parents are desperate to find one for their little ones in time for the holidays. For one Chapel Hill father, he thought he had found Fingerlings for his kids, but over 60 days later, he's yet to receive his order.

Edward Fitzgerald's son saw a Facebook advertisement for the interactive monkey and asked his dad for one.

"We saw it on Facebook and my son was said he wanted this and then his sister said she wanted one too, so I said okay, let's do it," Edward described.

Happy to order the toy for his children, Edward ordered through the company Buddha Feels back in September. Weeks passed, and the order never arrived.

"After a few weeks you know my son got excited and he would run out and he'd check to see if the monkeys had come, and they never came," said Edward.

Disappointed that his order never arrived, Edward wants others to know to be careful when ordering online.

We reached out to Buddha Feels and a representative on their end claims the order was fulfilled and shipped. The representative adds, "Unfortunately, the tracking number doesn't show the exact delivery date. I'll contact our manager to clarify this case and find the best solution. Please, accept my apologies for the delay." The representative did get back with me within 24 hours and said, "Unfortunately, we are still in touch with the shipping company trying to find out where is the order of Mr. Fitzgerald. We are very sorry that this is taking so much time, but for some reason, Mr. Fitzgerald preferred to contact you first instead of reporting the issue to us. We are trying our best now to resolve the issue, but you should understand that we are not a shipping company and we cannot influence the delivery terms after the parcel is shipped. I hope the issue will be solved soon to everyone's satisfaction."

Edward says he did reach out to Buddha Feels after 60 days of waiting for his order to arrive but did not hear anything back. When I asked Buddha Feels if they were selling WowWee Fingerlings, the representative added, "We've never claimed that our store sells WowWee Fingerlings. Our items are authentic and we have our own manufacturer. I hope Mr. Fitzgerald will enjoy the toy when he receives it." Edward is still waiting.

Edward is not alone, I have heard from several other parents who also are disappointed after ordering what they thought were Finergerlings online. While some websites may claim to be selling authentic WowWee Fingerlings, many will be selling look-alikes. The first sign to look for is Wowwee, the official brand name for Fingerlings. If you see any other brand name attached, know it's not the real thing. Also, anything with the name, Baby Monkey, Happy Monkey, Mini Talking Monkey, or Fun Monkey it's typically not the real Fingerling. Be careful with Facebook ads. You will find many other sites selling the toy monkey, but again it may not be the actual WowWee Fingerling.