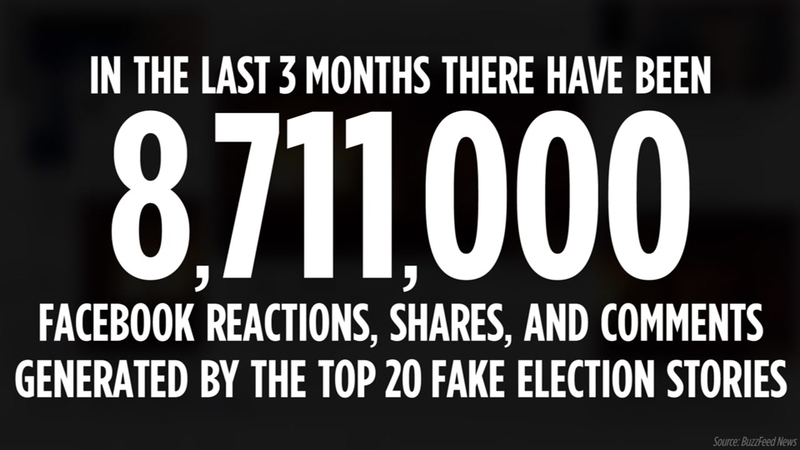 Hoax news articles being mistaken as factual events have been increasingly dominating people's Facebook feeds, spreading an alarming amount of inaccurate or completely falsified information to the public.

Pope Francis did not endorse Donald Trump during his election campaign, WikiLeaks did not confirm Secretary of State Hillary Clinton sold weapons to ISIS, and an FBI agent investigating Clinton's use of a private-email server was not found dead.

In the last three months prior to election day, there have been over 8,711,000 Facebook reactions, shares, and comments generated by the top 20 fake elections stories according to BuzzFeed News' Craig Silverman. These engagements outpaced the top 20 election stories from 19 major news websites, which received a total of 7,367,000 shares, reactions, and comments on Facebook.

One of most prolific fake news authors, Paul Horner, claimed he earned more than $10,000 a month writing "satire" articles on multiple websites, according to an interview with the Washington Post. In the past, his stories range from completely outlandish claims such as the infamous graffiti artist Banksy being arrested (and his true identity being revealed to be named Paul Horner), to Yelp suing South Park for lampooning them, to claiming that President Obama had banned the pledge of allegiance in schools.

However, Horner's articles have deceived millions, including top political figures. Former Trump campaign manager Corey Lewandowsky as well as Trump's son, Eric Trump, both fell victim to Horner, and retweeted his fake story claiming an anti-Trump protester was paid $3,500 to protest at a Trump rally in Arizona.

Horner, who said he hates Trump, told the Washington Post that he wrote many fake articles supporting Trump's claims in an effort to discredit those who shared the articles.

"I thought they'd fact-check it, and it'd make them look worse," said Horner. "I mean that's how this always works: Someone posts something I write, then they find out it's false, then they look like idiots."

It's becoming more and more difficult to identify the truth.

Not all fake news is 100 percent false, and a slight blend of truth to a story can make it even more difficult to distinguish the accuracy of its claims.

CNN Money's Brian Stelter describes three different types of fake news headlines designed to deceive you: 1) Hoax sites, filled with completely made up news; 2) Hyper-partisan sties, which don't necessarily lie but only share good news about their party, and bad news about the opposition; 3) Hybrids, which mix fact with fiction enough that you can't tell which is true.

The false news article on the right, from Nov. 2016, had taken elements from a true 6abc story from 2015 on the left.

One such hybrid website, which has since deleted its article, claimed that anti-Trump protestors in Philadelphia had beaten a veteran to death after he scolded them for burning the American flag following the 2016 election results. The article, which was categorically false, had taken elements from a true 2015 story about a homeless man who had died in a coma several months after being assaulted at a gas station. The fake news website even went as far as ripping video of the original news coverage from ABC station WPVI (6abc Action News), and muting the audio track that included WPVI anchor Sharrie Williams' narration of the true events. With the sound off, those who watched the video were misled to believe it was supporting the article's false claims.

On Nov. 14, both Facebook and Google announced a ban on fake news sites from using their online advertising services. Facebook CEO Mark Zuckerberg wrote a public post in response to the mounting pressure to curb the spread of fake news, claiming that the social media giant is working on a system to better reduce the spread of falsified stories, though does not want to censor people's opinions.

"We believe in giving people a voice, which means erring on the side of letting people share what they want whenever possible, wrote Zuckerberg. "We need to be careful not to discourage sharing of opinions or to mistakenly restrict accurate content. We do not want to be arbiters of truth ourselves, but instead rely on our community and trusted third parties."

How you can spot fake news.

"Websites that end in ".com.co" as they are often fake versions of real news sources," wrote Melissa Zimdars.

An assistant professor of communication at Merrimack College in Massachusetts, Melissa Zimdars, shared her criteria for suspect news sources via a public Google Doc. In the document, Zimdars describes some tips for identifying fake news such as:


How to stop fake news from spreading: fact check and share.

Both Zuckerberg and Zimdars recommend reading other sources to verify information, and some 3rd party websites are dedicated to debunking fake or questionable stories.

PolitiFact.com, run by the Tampa Bay Times, is a Pulitzer Prize-winning website dedicated to fact-checking political statements made by both major parties. Claims and statements are rated on a grade scale of accuracy dubbed the "Truth-O-Meter," ranging from "True," "Mostly True," "Half-True," False," and "Pants On Fire!"

Snopes.com is a privately run website, created by Barbara and David Mikkelson, dedicated to debunking urban legends and stories of questionable origin.

FactCheck.org is a non-profit, non-partisan consumer advocate site run by the University of Pennsylvania dedicated to reducing "deception and confusion in U.S. politics."

If you spot a false news story on social media, we recommend finding the fact-checked link at any of the above sources and share it with those spreading inaccurate information.

How to stop fake news from appearing in your Facebook news feed.

You can report a news story as being false on Facebook, and prevent any story from that source appearing in your feed again.

You can report a story as being false on Facebook, and prevent any story from that source appearing in your feed again.

When you come across a fake news article on Facebook, you can click the small arrow in the top right of the post. A dropdown will appear, giving you the option to "Report Post." From there, select "I think it shouldn't be on Facebook" and push continue.