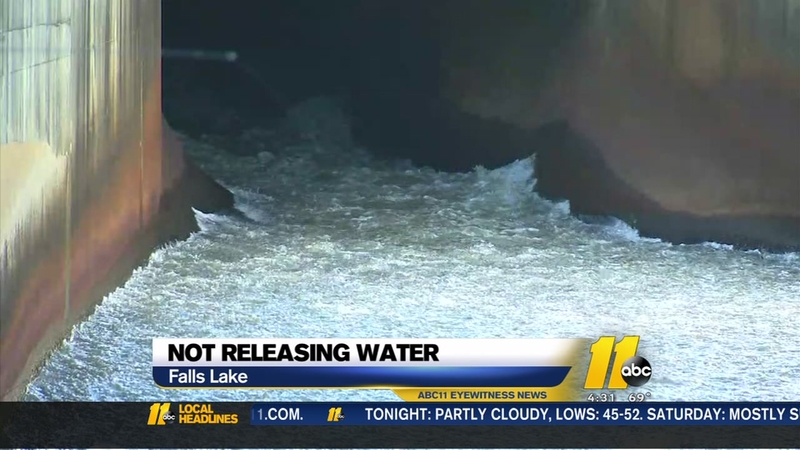 FALLS LAKE, N.C. (WTVD) -- The governor announced Friday a commitment to save communities, and that means refusing to release water as rivers and lakes reach capacity.

One place where the water levels are high is Falls Lake. The decision to release water from Falls Lake dam is a calculated one - and the levels are being monitored very closely.

The Army Corps of Engineers says they have to wait until Monday before releasing water from the dam. Beginning Monday morning, and lasting for 24 hours, water from the dam will be released at 2,000 cubic feet per second.

On Tuesday, that amount will increase to 4,000 cubic feet per second. The Army Corps of Engineers is working around the clock with NOAA and the Southeast River Forecast Center to determine how to move forward with releasing water.

After Tuesday's release, a decision will be made on whether the Corps of Engineers will decrease or perhaps increase water flow out of the dam. Officials with the Corps of Engineers say they are thankful for the forecast and dry weather in the time being for making this decision manageable. Gov. Pat McCrory also keeping people who live downstream in mind.

"We made this commitment four or five days ago that we are not going to release water from the dams above either the Tar River, the Neuse River," McCrory said at a press briefing Friday afternoon. "It's very important that we're steady stream and no one's hit all of a sudden. That's extremely important."

Once water is released from the dam, it takes six days to see any impact to New Bern. The gauge in Clayton will be the first stop, and officials should have an idea of how well the release is going.

He agrees with McCrory and has sympathy for those affected. Shears was at the base of the dam on Friday, and said he thought the water would be much higher than it was Friday.