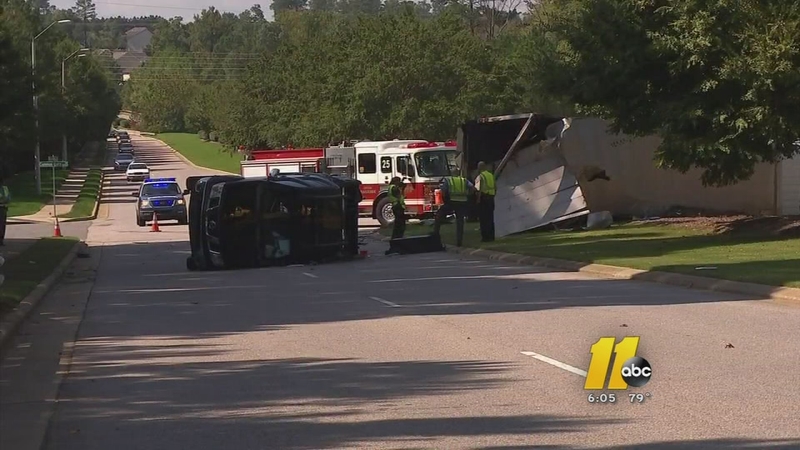 RALEIGH (WTVD) -- A deadly crash in North Raleigh has residents and workers in the Wakefield development calling for traffic changes.

Just after 11 a.m. on Friday, a delivery truck t-boned a Nissan pickup truck on Falls of the Neuse Road at its intersection with Common Oaks Drive.

The 33-year-old female driver of that pick-up truck was killed. She has been identified as Michelle Christi Dayton.

The driver of the box truck, Kenneth Gacheru Ndungu, said Dayton pulled out in front of him and he couldn't stop in time.

A wreck report provided by the Raleigh Police Department confirms that account. The report also shows the collision caused a third vehicle, driven by Tood Patrick Utter, to overturn.

Both Ndungu and Utter were uninjured, according to police reports.

Falls of Neuse Road is four lanes wide with additional left turn lanes and a grass median at the intersection with Common Oaks. But there is no traffic light, just stop signs on Common Oaks.

"Because of the way the traffic flows, people try to get into the middle so they can get across," says Holly Walter, whose office is in a building at the intersection.

"It sounded like a bomb going off," Walter said, describing the crash.

She said she went outside and saw the mangled vehicles.

"I thought, 'Here we go again' because there's a lot of accidents here all the time."

Wakefield resident Alice Lynch stopped to survey the damage. She says it's past time for a traffic signal.

"I don't think we should be waiting till someone almost dies or dies to be putting in red lights," Lynch said. "There's several intersections on [Falls of Neuse] in this Wakefield area that need to have traffic lights."

"There's no red lights at these intersections. And these are congested. There's apartments all around here There's, there is shopping centers. It, it's a congested area," Lynch continued.

The area is about to get more congested. Just a few feet from the intersection, a huge new apartment complex is about to open. And a church is planned across the street.

With all the schools in the area, she says she has an even bigger concern.

"We have school buses that turn here too, and it's just really a matter of time I think."