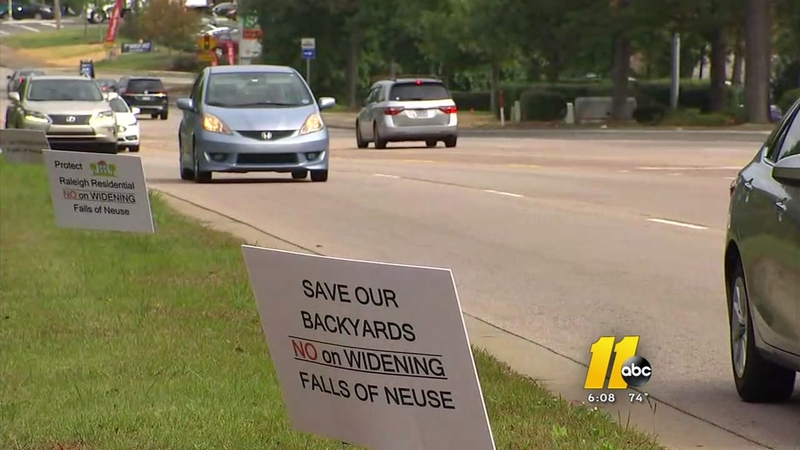 RALEIGH, North Carolina (WTVD) -- The NC Department of Transportation is pursuing a widening project that would make the stretch of Falls of Neuse between Durant Road and I-540 three lanes in both directions.

Department of Transportation spokesman Steve Abbott said Falls of Neuse has a significantly higher crash rate over similar roads across the state; he said it is "projected to have traffic count grow about 25 percent in the coming years."

But if everyone agrees something needs to be done, most people also agree that any construction would make things worse - perhaps much worse - during construction.

"I would just be concerned about what the traffic would be like during construction of doing something like that," said Celeste Simmons, who lives in north Raleigh. "I think it's going to be a mess for a while. It might make things worse before, potentially, if we decide to do it, it might get better."

There are still some major decisions to be made on the project; not the least of which, to decide what side of the street to expand. Both would require the acquisition of private property.

"If they take 30 feet of the west side, they'll be right into my septic drainage," worried Harvey Nanney from his yard on Falls.

Nanney lived in the same home when Falls of Neuse was originally widened around the time 540 was built and that long experience has led him to this other, broader concern; "Widening the road is not going to help if you're going to add 10,000 more cars. "If they're going to put 10,000 more cars here, then they have defeated the purpose of alleviating the traffic. And I don't know why we'd do that."

As much as Nanney said he worries about his side of the road being taken, he also has been staying tuned to what would happen across from him if the state goes in the other direction.

"If they go down the east side," he said, "all of these businesses are going to have to be moved. I'm concerned it's going to be all of us. Whenever you mess with one in the community, you mess with the whole community."

Nanney said his name is alongside others on a petition fighting the widening project, but he says he won't fight it hard.

"If it comes, it comes. They have to do things at the city or in the county to alleviate problems they have so I won't fight them for it. If they try to take some of my property, I'll fight them for money," he said.

Abbott said it's too early to know when the agency will reach a decision on what side of the road will be taken. The state is reviewing public comments.

"Planning for the project is still underway," Abbott emailed ABC11, "with an expected start of construction in the fall of 2019. Two alternatives are being considered. One would widen Falls of Neuse primarily on the east side of the roadway, and the other on the west side. The east-side option would have an added cost because of a Duke Energy power line that would have to be relocated, but the west-side option has a higher estimated right of way cost. The projected construction cost for either option is $7.7 million."
Report a correction or typo
Related topics:
trafficraleighwake countyconstructionraleigh news
Copyright © 2022 WTVD-TV. All Rights Reserved.
TOP STORIES
Record-breaking heat today for Triangle
Officials remain optimistic as tourism in Wake County booms
Driver struggles to get permanent tags for truck bought on Vroom
Violent crime in Durham up 8% during first few months of 2022
Funerals begin for victims of Buffalo supermarket shooting
American Airlines flight veers off runway in Charlotte
Decrease in home sales predicted nationwide but NC housing market hot
Show More
NY high court to determine if Bronx Zoo elephant is a person
Juvenile taken into custody in Wake Forest shooting
911 dispatcher who took Buffalo shooting call put on leave
Wake County Sheriff Baker says he'll seek runoff
Trump to hold July rally in Greensboro
More TOP STORIES News