New in vitro method could be 'game changer' for aspiring parents 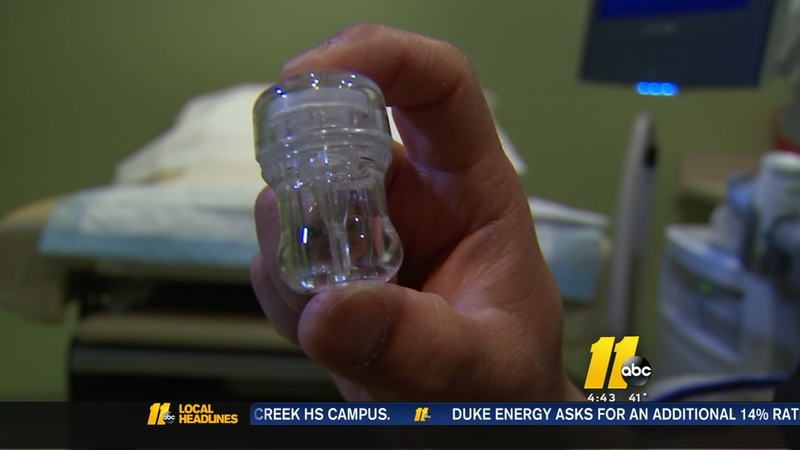 RALEIGH, NC (WTVD) -- The CDC has found that 12 percent of women aged 15-44 in the United States have trouble getting pregnant or carrying a baby to term.

For some, in vitro fertilization (IVF) can help, but, it comes at a high financial cost. In the Triangle, Carolina Conceptions is offering a new IVF procedure called INVOcell which costs less than half the average price of traditional IVF.

"So, for INVOcell, the ovarian stimulation protocol is much simpler than traditional IVF because we don't need as many eggs," explained Dr. John Park, a reproductive endocrinologist at Carolina Conceptions.

"So, not as many ultrasound visits and a lot less medication used compared to traditional IVF. It's a much simpler more natural way of doing IVF," Park said.

INVOcell might be a game changer for in vitro fertilization

Park said doctors retrieve eggs and place up to six eggs and sperm in a cylindrical piece of equipment called INVOcell. The device is placed immediately in the patient's vagina, where it stays for five days.

"The patient herself is the incubator and now we don't need an expensive IVF lab, expensive incubator, the conditions are more natural," Park said.

After five days, the INVOcell is taken out and taken to the embryology lab, which assesses the number and quality of embryos. Patients aged 37 and younger have only one embryo transferred into the patient, and Park said that in most cases, other healthy embryos can be frozen for future pregnancies.

"IVF has gotten more complex, more complicated so the cost continues to go up," Park said. "The typical IVF cycle can easily be $15,000 or $20,000 if you are doing genetic testing on embryos. This is less than half that procedurally, it's around $6,000 and the cost of medication is pretty minimal compared to what you would normally spend on medications so it is a game changer.

"IVF has pregnancy rates of 60 to 70 percent in this age range," he added. "In preliminary studies, they're showing INVOcell pregnancy rates are just as good with the right candidates for half the cost of regular IVF."

The best candidates for INVOcell are women younger than 38 with a BMI under 38, an AMH of 1.5 or more, and good sperm quality.
Report a correction or typo
Related topics:
family & parentingraleighwake countypregnancyfertilityscienceraleigh news
Copyright © 2021 WTVD-TV. All Rights Reserved.
TOP STORIES
Cooper urges NC businesses to make workers mask up or get vaccinated
Detroit Pistons take Cade Cunningham first in the NBA Draft
Federal workers required to get vaccinated; military may be next
Teen bitten by what is believed to be a shark at Wrightsville Beach
Fayetteville couple says broken wedding venue A/C was 'unbearable'
Vet tech shortage could spell trouble in pet emergencies
Show More
Heat Advisory issued for central NC ahead of high temps on Friday
Johnston County school board makes masks optional for students, staff
As COVID cases increase, demand for testing also going up in Triangle
Dozens of COVID-19 cases across the US linked to NC summer camp
Fort Bragg soldier dies at underwater training school
More TOP STORIES News