WTVD
By Alexa Thompson for Babble 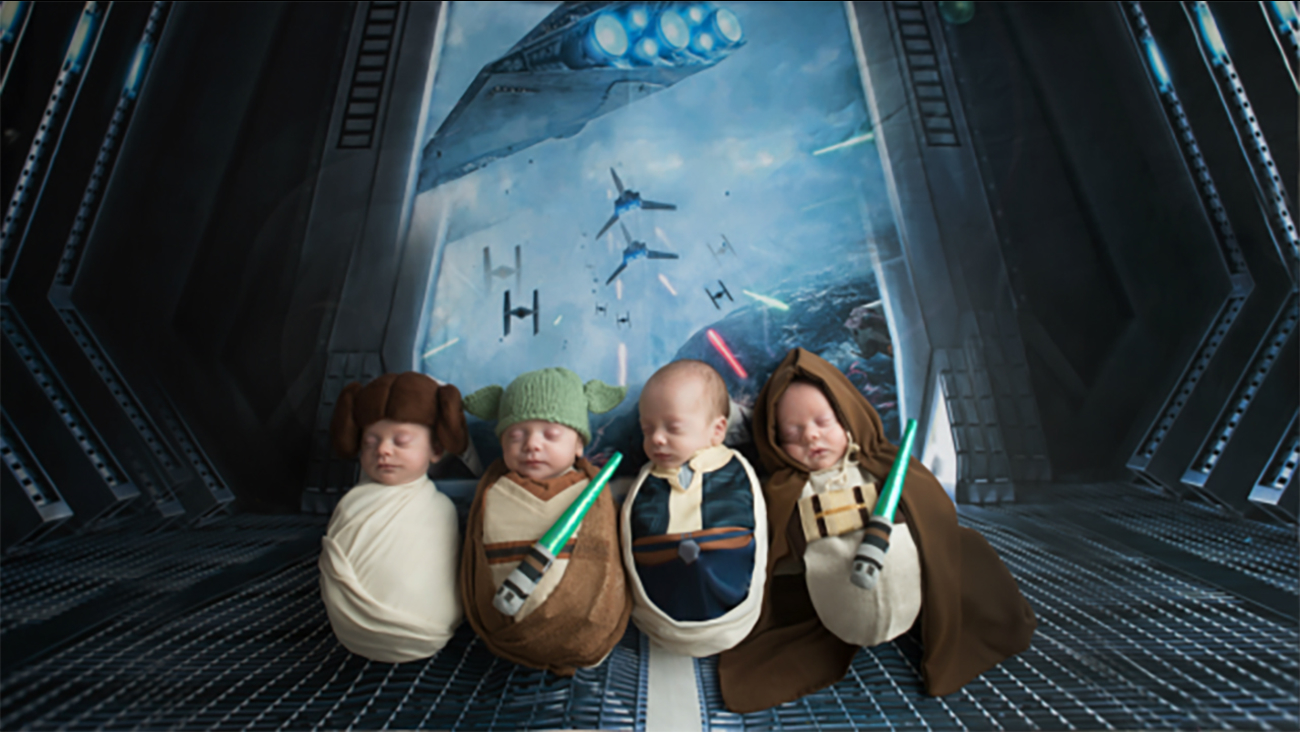 A (not so) long time ago in a galaxy far, far away (well, Mesa, Arizona), one talented photographer took the cutest pictures of young Jedis and stormtroopers that I've ever seen.

The spontaneously conceived quadruplets in the photos were born at 29-weeks gestation and spent several weeks in the NICU. But now, the babies, Damon, Gideon, Theo, and Emery, are thriving - and channeling the force thanks to their clever parents and newborn photographer Lizzy McMillan.

As big science fiction fans, the parents of the quadruplets, Kylie and Phillip Szafranski, requested "something fun" for the theme of their newborn photo shoot and landed on the ultimate sci-fi hit, Star Wars. And the shoot came out just as epic as the movies!

The two photos feature The Szafranski Quadruplets - three boys and one girl - dressed as members of the Rebellion, and conversely, the Empire. Also, did you ever think you would see Darth Vader with a pretty white bow?!

Momento Studios photographer and mom of three Lizzy McMillan, 32, started off planning the photo shoot to feature the Star Wars good guys: Luke Skywalker, Princess Leia, Han Solo, and Yoda. But after Phillip requested characters from the Empire, McMillan was faced with a new challenge. Being as parents don't typically dress their babies up as the villains from the Star Wars films, McMillan had to think strategically about where to find the costumes and props.

But as McMillan tells Babble, she eventually found success at Build-A-Bear Workshop (believe it or not), which had everything she needed to transform these cuties into the Star Wars staples. "Not only did Build-A-Bear have the masks I needed for the Empire set, but they also carried a range of other outfits for all the Star Wars characters. That's when I knew I needed to create both images."

McMillan also sourced a wool-fiber artist who hand-crafted Princess Leia's wig, featuring the iconic buns, and another to hand-knit the Yoda cap.

The two images ended up creating the perfect juxtaposition - I mean, we all have our good and bad moments, right?

According to McMillan, the entire photo shoot took just under four hours, which also captured the family in regular attire (not members of the Galactic Empire). McMillan explains that she actually made good time considering there were four babies to keep calm, fed, and changed. She and her two assistants also added a few techniques of their own to make the newborns feel more comfortable, including keeping her studio at 82 degrees Fahrenheit and utilizing a white noise machine.

But while photographing multiples is challenging, McMillan, who has 14 years of photography experience under her belt, says "newborns own [her] heart" and are actually her favorite age to photograph.

"Being able to document this new chapter in a family's history is absolutely priceless and something I cannot adequately put into words," she describes.

I'm sure McMillan has given this family a memory that will last for light years to come!