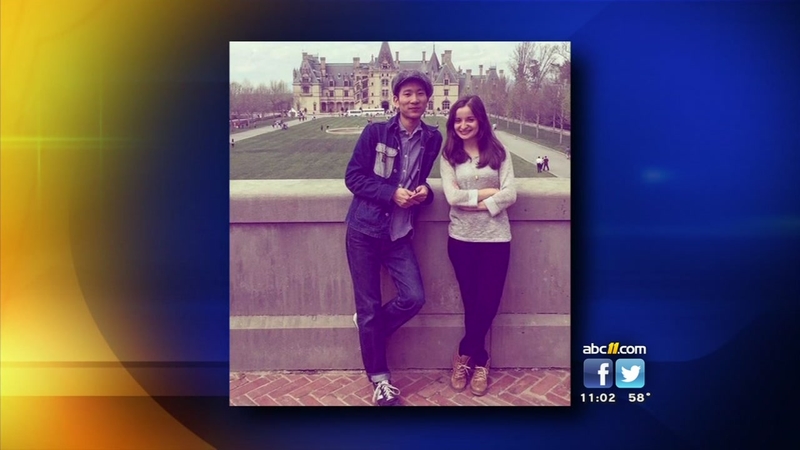 RALEIGH (WTVD) -- Juana Maria Cardona-Alvarez and her boyfriend, Hiroshi Arakawa, had just left a friend's house Thursday and were headed to Knightdale to continue celebrating Thanksgiving. They never made it.

Raleigh police investigators say the 22-year-old Cardona Alvarez was headed south on Battleford Drive in her Honda just before 7 p.m. She was turning left onto Lynn Road and failed to see an oncoming Toyota before pulling in front of it.

Her car was hit from the side, killing her and severely injuring Arakawa, 25.

Rumors began to spread that alcohol was a factor in the crash, particularly when a bottle of wine was spotted on the roof of the Honda after the crash.

Friends and family said Friday those rumors are untrue as the couple was leaving the house of a MADD (Mothers Against Drunk Driving) advocate. They say the bottle of wine found in the car was unopened and was meant as a gift.

Raleigh PD said earlier Friday that alcohol was not a contributing factor in the crash.

Friends and family were in disbelief after learning of Thursday night's tragic accident.

"Thanksgiving is a really big holiday for travel and I always worry about family and friends being safe," said friend Craig Reed. "And I think my first reaction was just shock."

One person was killed and one seriously injured.

Cardona-Alvarez was born in Colombia, then moved to Japan, and eventually relocated to Raleigh on a student visa to study English at Wake Tech. She was living with family in Raleigh before accepting a job as a live-in nanny toward the end of the summer.

Arakawa moved from Japan to Raleigh after learning about the Triangle's vibrant bluegrass scene. Arakawa would go on to also study English at Wake Tech.

He later enrolled at East Tennessee State University where he was studying business administration and bluegrass.

On Nov. 23, Cardona-Alvarez had just celebrated her 22nd birthday. They attended an event at Raleigh Times that evening. Arakawa was a former co-host at an event there called "Beer and Banjoes."

Since moving to Raleigh, Arakawa had begun to make a name for himself. His friends calling him a "rare talent" and his musicianship "incredible". The News & Observer did a story on him

"It's a really special story," Reed said. "This is somebody who came here to learn English and everything else," he continued. "But I feel like he has this hidden agenda that he loved the bluegrass community and he loved the music scene here and that's what he wanted to embrace."

Arakawa is currently in the Intensive Care Unit at WakeMed where he is listed as being in critical, but stable condition. ABC11 has learned he is heavily sedated and unable to talk.
Reed does not believe Arakawa is aware of Cardona-Alvarez's death.

"I know it's going to hit him pretty hard," Reed said. "They had a really close relationship being friend, translators for each other, obviously partners as well. So it's going to be hard."

Nicholas Alberto Rivera-Rubio, the 18-year-old driver of the vehicle that struck Cardona-Alvarez and Arakawa said he is doing "fine." His mother also told ABC11 that "(Nicholas) is healing right now, and we are waiting for a call from the police."

Friends and family of Cardona-Alvarez and Arakawa say officials had a tough time locating relatives because Arakawa's family is in Japan and he had no emergency contact listed.

Cardona-Alvarez has one parent in Atlanta and another in Japan who are en route to Raleigh.

A representative for the family of Cardona-Alvarez says a date and location for a memorial or funeral will be determined next week.

WANT TO HELP? DONATE TO THE GOFUNDME PAGE HERE

A GoFundMe account has been set up for Cardona-Alvarez. The Raleigh bluegrass community said "we are going to do what we can" to assist Arakawa with medical expenses and traveling expenses for his family.