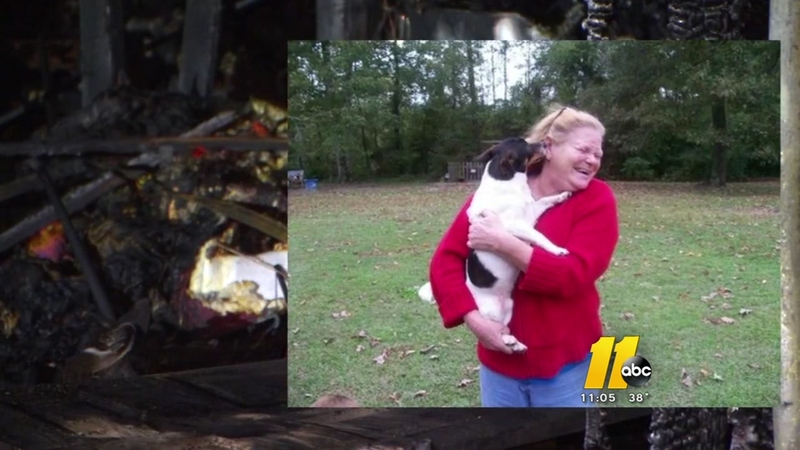 FOUR OAKS, North Carolina (WTVD) -- A faint, smoky odor coated the air in the 600 block of Oliver's Grove Road in Four Oaks nearly 24 hours after the charred mobile home went up in flames.

Inside, fire officials discovered the bodies of 65-year-old Kay Allen and her Jack Russell terrier, Curly Bob, inside.

"Bad. Really bad. It's not much left of the structure," a fire official said.

Neighbors said the blaze overtook the sky early Friday morning, about 5 a.m., knocking out power to nearby homes.

"The whole horizon ... I come out that door and was coming out to go to work and everything was lit up," a neighbor said. "I knew something was bad going on."

Allen's children were too heartbroken to talk on camera, but told ABC11 they live right next door to their mother.

They heard a loud boom this morning and when they looked out the window, they saw her home fully engulfed in flames.

Her daughter, who had just seen her mother a few hours before the fire, made the 911 call.

Courtesy of the Allen family

"She was a sweet lady," the neighbor said. "She was a good neighbor."

Family members said Allen had a sense of humor unlike any other, and she loved her dog Curly Bob and was fond of Coca-Cola.

"Praying for the family," the neighbor said. "Everybody is just trying to come together and see what they can do to help. It's a bad situation."

ABC11 has decided to slowly reduce the number of stories on the website that have a comments section. We believe very strongly that our audience should have an opportunity to discuss and debate events in our world, however, we have not been able to moderate the comments as well as we would like. Instead of hosting a platform that could allow a few loud and ugly voices to dominate a conversation, we want to encourage everyone to join us on our social media platforms and speak out there. Facebook: facebook.com/ABC11 Twitter: twitter.com/ABC11_WTVD
Report a correction or typo
Related topics:
johnston countyfour oaksfirewoman killeddogjohnston county news
Copyright © 2022 WTVD-TV. All Rights Reserved.
TOP STORIES
A motorcycle's unforgettable ride back home
Trees downed, power outages reported after powerful overnight storm
Record-breaking heat today for Triangle
Driver struggles to get permanent tags for truck bought on Vroom
American Airlines flight veers off runway in Charlotte
Our America: Because I Am | Full episode
Officials remain optimistic as tourism in Wake County booms
Show More
NC State's Tommy White breaks ACC freshman home run record
Violent crime in Durham up 8% during first few months of 2022
Funerals begin for victims of Buffalo supermarket shooting
Decrease in home sales predicted nationwide but NC housing market hot
NY high court to determine if Bronx Zoo elephant is a person
More TOP STORIES News