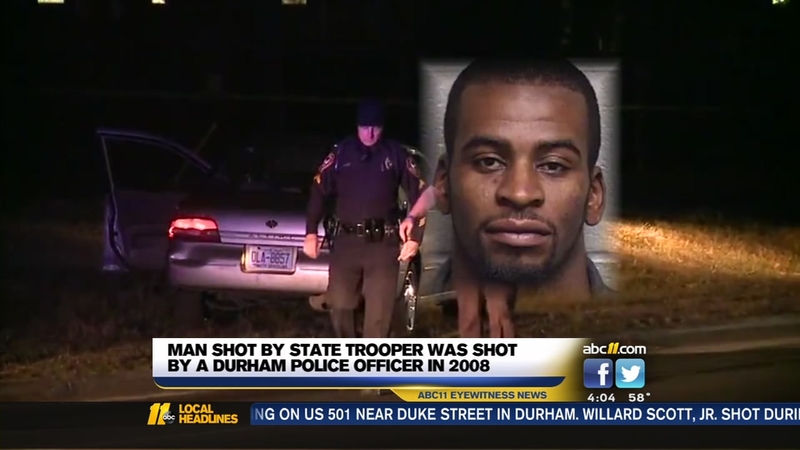 Man shot by trooper had bumpy history with law officers

DURHAM COUNTY, North Carolina (WTVD) -- The man killed in a trooper-involved shooting Sunday had been shot by a law enforcement officer in the past, according to court documents.

The Highway Patrol said Mathis tried stopping Willard Eugene Scott Jr. for a lane violation and erratic driving shortly after 1 a.m. Scott refused to pull over, leading Mathis on a brief chase before getting out of his car and running.

Authorities said Mathis fired at Scott while running after him, during an "armed confrontation."

The SBI, which is now leading the investigation, said a black handgun that does not belong to the Highway Patrol was found at the scene.

Records show that in 2008, Scott was charged with assault on a law enforcement officer with a firearm and assault by pointing a gun. The charges were later dismissed.

Durham police told ABC11 that on Jan. 16, 2008, officers responded to a call about a man with a gun on Seven Oaks Road. An officer shot Scott in the leg after he refused to drop his weapon.

Court records also show Scott would have been due in court Tuesday on misdemeanor charges of assault on a female and assault on a government official.

Mathis has been placed on administrative leave pending an internal investigation as is standard operating procedure in any trooper involved shooting.

According to the North Carolina Department of Public Safety, the department recognized Mathis "for acts of valor, meritorious service and being a good Samaritan" in November 2013.

In Feb. 2013, Mathis was on duty when Trooper Michael Potts was shot in Durham County. According to NCDPS, Mathis was first on scene and treated Potts until EMS arrived.