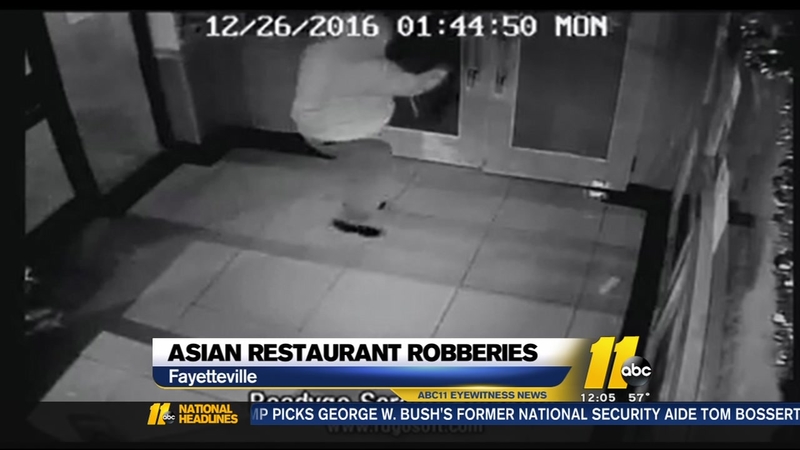 FAYETTEVILLE, NC (WTVD) -- Fayetteville Police have released new surveillance video of the burglar they believe is responsible for a rash of break-ins at Asian-owned restaurants in town.

The video shows a man breaking the front door of Hibachi Grill Supreme Buffett on Bragg Boulevard on December 26 around 1:44 a.m. and proceeding to the back of the store to find cash.

The smash and grab at Hibachi Grill Supreme Buffet was the sixth break-in at Asian eateries this holiday season.

Fayetteville Police believe the same suspect is responsible for burglaries at five other restaurants long Ramsey Street and Bragg Boulevard.

Michelle Liu, the owner of Golden China says her restaurant was one of the first that was burglarized.

Liu says she moved to Fayetteville from New York for a better opportunity. She tells ABC11 that nothing like this has ever happened before.

ABC11 showed her the surveillance video of the latest incident. Liu was relieved that police are closer to catching the crook.

Meanwhile, Fayetteville Police are working with business owners to make sure that their restaurants don't remain targets.

"Detectives have spoken with a lot of restaurants that have been broken into. But also our crime prevention specialist along with second lieutenants are making rounds and talking with businesses on how they can better secure their property so they don't become a victim", said Lt. Todd Joyce.

It is believed this same suspect has broken in to at least five other Asian owned restaurants since the end of November:

Anyone with information regarding the identity of the suspect or the burglary investigations is asked to contact Detective A. Dickinson with the Fayetteville Police Department at (910) 709-7812 or Crimestoppers at (910) 483-TIPS (8477).