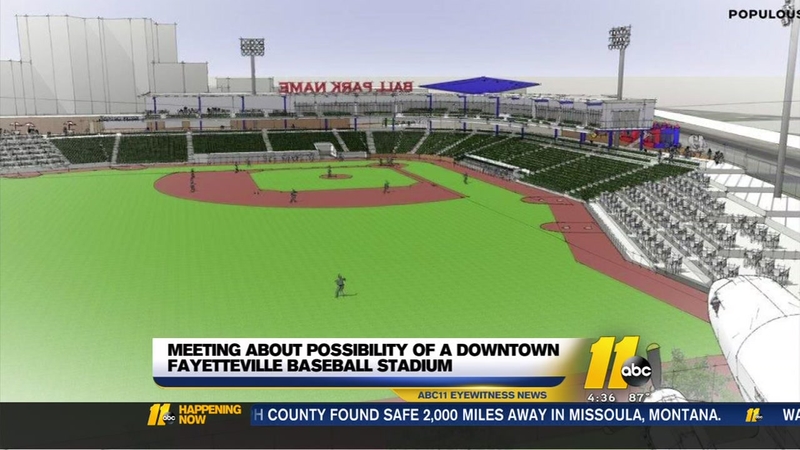 FAYETTEVILLE (WTVD) -- The Fayetteville City Council is looking into a new report on the benefits of building a minor league ballpark in the downtown area. The city says a team has shown interest and the council met Monday evening in a special session to discuss the proposals.

No decision was reached at the council meeting Monday. The council will consider the matter at a later date, ABC11 has learned.

A team of consultants put together the 300-page document on the proposed ballpark and its benefits. According to reports, the Houston Astros have indicated they would be interested in fielding a minor league team for the new ballfield.

One possible location is along Hay Street behind the historic Prince Charles Hotel.

City leaders say it would be a home run for the entire community. City council member Bobby Hurst, a downtown business owner, said the ballpark would be good for development.

"I have to admit, it is very exciting," he said. "And when you look at the sketches of what we have seen, you know it's great. It's awesome, and of course I have been to several minor league and Major League baseball games, and you know it's great family fun."

Residents are also excited about the idea of having a downtown ballfield. Folks told ABC11 that it would make the game a destination event where they could get dinner at a restaurant before heading into the ballpark.

Another resident said minor league games are lots of fun to go to and it would be great to have a team in Fayetteville.

The city had a farm team for the Detroit Tigers, the Fayetteville Generals, from 1987 to 1996.

In March, Major League Baseball officials announced they were building a ballpark at Fort Bragg for a game between the Miami Marlins and the Atlanta Braves on July 3. The stadium will seat 12,500 fans and will be converted to a permanent softball field and multi-use facility afterward.

Read more on the game and stadium plans at Fort Bragg.