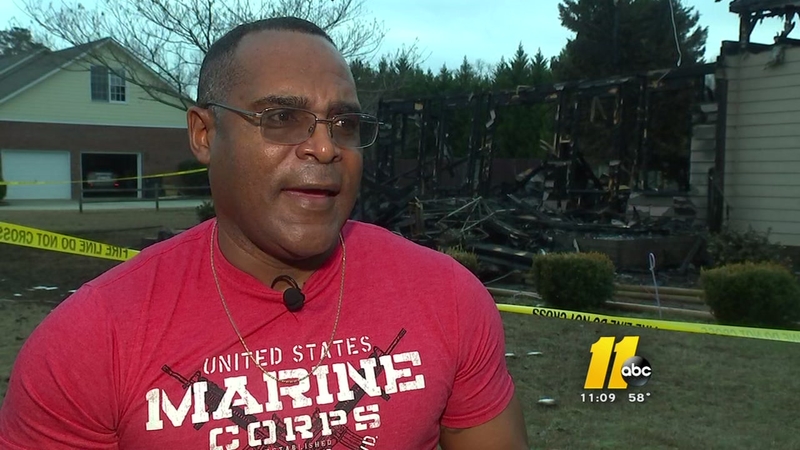 Deputy picking up pieces after home burns down Christmas Eve

FAYETTEVILLE, North Carolina (WTVD) -- A Cumberland County sheriff's deputy is looking for a temporary home for his family after a fire early Christmas Eve took their home of 16 years.

"This right here was actually the front porch," described Deputy Michael Martin, as he walked around what is left of his home on Big Bay Road in Linden, just outside of Fayetteville.

The fire sparked early Christmas Eve morning, waking some neighbors sometime after 2 a.m. Martin and his family were out of town since Dec 22, Martin's birthday.

"My wife surprised me and took me to Myrtle Beach for my birthday," Martin said.

He said they woke up early Christmas Eve and noticed they had many missed calls. At first he thought maybe they were from people wanting to wish him a happy birthday. Then he saw the calls had come in from overnight.

"That's never good news when you get a call at two or three in the morning," Martin said.

Fearing it might be bad news about his elderly mother, Martin returned one of the calls from a neighbor and friend.

Neighbors were relieved to hear Martin and his family were out of town. Hours before they heard from him, they said they thought the family was in the home. Martin said one neighbor even tried banging on the front door, yelling for them to get out, before the fire became too intense.

Martin woke up his wife and daughter, and they rushed home to find their house had burned down.

On Tuesday, Martin walked us around to the side of the property to where the living room was and where he was told the fire started.

There is no official cause of the fire yet, but Martin believes there were several contributing factors. He said they had lights plugged in with an extension cord and many gifts under the tree.

"We had a hoverboard under there, we had a laptop and both of them have lithium batteries," said Martin.

You may recall last year, some hoverboards were recalled last year because of overheating batteries that led to problems.

As far as the tree, Martin said they thought they were doing everything right in keeping it watered. He said they do keep the house warm in the winter and noted the fire inspector told him that even well-watered trees, after a while, can still dry out.

"The fire inspector when I talked to him he said sometimes even when you keep those live Christmas trees watered they can still dry out."

The American Red Cross has been helping Martin and his family but they say the time for that help has run out. With the holiday, they only had all day Tuesday to look for a temporary lease at apartments and hope something works out soon.

Meantime, Martin said the support from his colleagues at the sheriff's department, neighbors and friends, has been overwhelming. He said deputies have come by just give him a hug or donate clothing. He said now days after the fire, he feels okay.

"Human nature, you're going to feel sorry for yourself and have this 'why me' type thing and I went through that, I was a little bit depressed. It was around Christmas time, I'm thinking I lost all my Christmas presents, everything I worked for, for the past 30, 40 years is gone," Martin said. "So I went through that phase and then as days went on I sort of looked around and oh well, you know what? I lost those things, but I didn't lose my life. My daughter didn't lose her life, my wife didn't lose her life. I'm blessed, I'm OK."

Martin said he would like to rebuild his home when they're able. Loved ones have even started a GoFundMe page to help the family start anew.