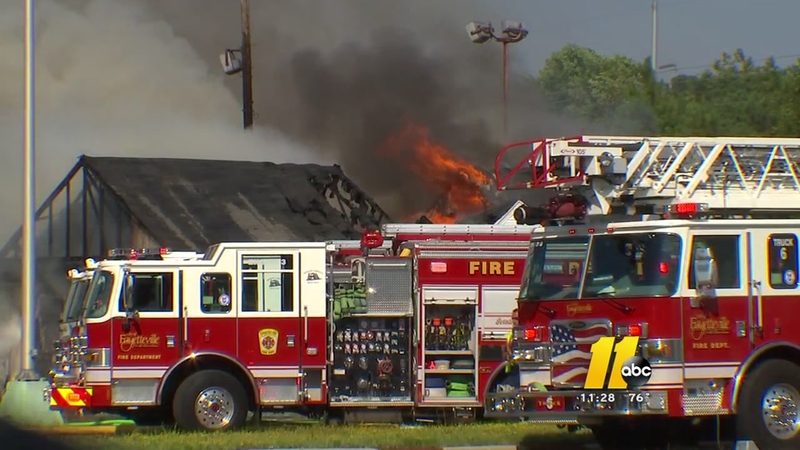 FAYETTEVILLE (WTVD) -- One firefighter was taken to Cape Fear Valley Medical Center on Tuesday afternoon after becoming overheated while fighting a large fire in Fayetteville.

The flames broke out around 4:30 p.m. at the Shamrock Auto Sales on Bragg Boulevard near Pamalee Drive.

When crews arrived the building was engulfed.

The northbound section of Bragg Boulevard was shut down while they battled the flames.

One firefighter taken to the hospital after becoming overheated while fighting this fire in Fayetteville today pic.twitter.com/n9xGwKypmV

Extra firefighters had to be called because of the dangerous heat.

The Red Cross also responded to provide water and food to crews who took turns fighting the fire.

"One thing that's really put a damper on the fire suppression efforts is the heat. What normally could be taken care of by several units is requiring a lot more resources on the scene due to just the heat and humidity. We can't stay in as long we need to keep the folks hydrated," said Battalion Chief Michael Martin.

The building was vacant and is a total loss.

The stricken firefighter was later released from the hospital.

Investigators are trying to figure out how the fire started.