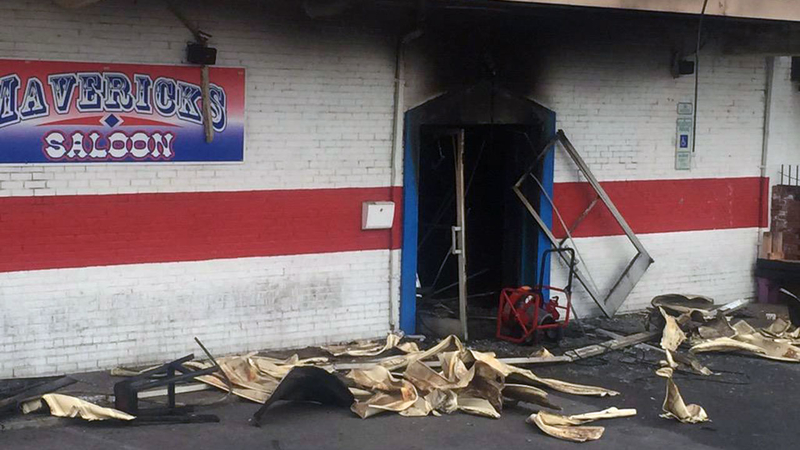 FAYETTEVILLE (WTVD) -- Investigators are determining whether there's a link between a recent fight involving a soldier and bar bouncer, and an overnight fire that ruined the business.

"The guy staying with me now, he come and woke me up," said Pete Logue, the man who called 911 from his nearby home. "Heard a big bang. He thought it was a transformer."

"It was all flames," Logue continued. "I mean it was coming out big time."

Logue is an employee of Paddy's Irish Pub, a business connected to Mavericks. Paddy's and several businesses in the strip mall were severely damaged by smoke from the Mavericks fire.

Fire investigator confirms soldier/bouncer fight will be investigated as possible cause behind suspicious bar fire pic.twitter.com/TmDEuzZzVs

The Paddy's staff had just finished renovating and installing flat screens about an hour before flames took over Mavericks. The estimated smoke damage is $100,000.

"It's really hard to say if somebody entered the building or something was thrown," said Fayetteville Fire Department Assistant Chief Richard Bradshaw. "We just don't know. It's way too early."

Bradshaw did confirm that recent events, which includes a fight between a Fort Bragg soldier and Mavericks bouncer, would be investigated as a possible connection to the blaze.

"If we can tie any of them together, naturally we'll be trying to do that," Bradshaw said.

Images of Gabriel Ciraulo's missing front tooth, bloodied head and swollen face have been shared tens of thousands of times this week from his brother's Facebook page.

Ciraulo's brother and father say the 21-year-old Fort Bragg soldier was beaten unconscious by a Mavericks bouncer twice his size.

It happened outside the business Thursday evening.

Fayetteville Police confirm they continue to investigate the fight, in which the bouncer and soldier have differing accounts.

On Tuesday, they obtained surveillance video to help piece the story together.

Hours later, Mavericks was on fire.

***FALSE EMERGENCY ALERT*** You may have seen this message on your TV tonight.There is NO emergency. This message went out in error #ReadyNJ pic.twitter.com/qzh0l9rZ03

Mavericks' owner declined an interview on Tuesday and Wednesday regarding both incidents, but someone representing the business posted a message Tuesday to angry Facebook users regarding the fight.

The post, which has since been removed from Facebook, said the business was deemed within its right for what occurred Thursday evening. It said investigators had not found the business to be at fault.

The SBI and ATF will join Fayetteville authorities in the fire investigation.

"What happened next door has destroyed us," said Gibney. "And not just my business, but several others as well around the corner and attached to this complex."

Gibney said he will try not to be too discouraged over the damage to his business and the closure they face for several weeks, but he can't help but think of the social media outcry he's heard about over that fight next door.

"I'm fine, and we'll be fine," he said. "And I hope the people that were involved in this know that .." Gibney paused before continuing.

"Well done," he said. "You got everyone back. I hope you feel good about it, and I hope we can all get on with our lives."