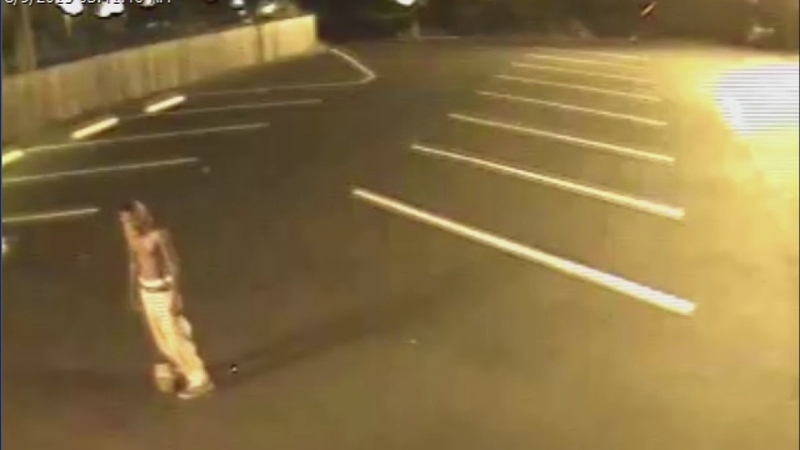 FAYETTEVILLE (WTVD) -- Surveillance video from the parking lot where a man's body was found Sunday morning is offering a closer look at the man police have identified as a murder suspect.

The Dream Center is located off Ray Ave., across from the city's Festival Park. It's an outreach center for Manna Church, and the location where an unidentified man's body was found over the weekend.

Around 9:40 a.m. Sunday, FPD responded to the report of a man's body found between the back doors of the property. He had been killed in a violent act, according to police.

While the man remains unidentified, the homeless I.D. system is being used by authorities to help identify him and notify family members.

Dream Center volunteers said he was a 65-year-old man who'd been coming to the safe haven over the past three months. He'd told them he'd had a falling out of sorts with a roommate.

SURVEILLANCE CLUES AND A VIGIL

Surveillance video released over the weekend shows a slender black man wearing cargo pants and no shirt in the back parking lot of the Dream Center. The man is also wearing a light-colored mask and carrying a large object that looks like a brick or cinderblock.

Police believe the object he is carrying was involved in the unidentified man's murder, but the motive is still unclear.

"They're (the homeless) very protective of their equipment that they do have," said Twedell. "It's all that they have, but a lot of times tents have been stolen. Shoes have been stolen from their areas, wherever they live. So I don't know if this is a case of that. We just can't say."

On Thursday morning, a vigil will be held in front of the Dream Center to honor the man. It will be during the weekly Angel's Kitchen food giveaway, an event the victim would frequent.

Anyone with information concerning the homicide is asked to contact Detective M. Ballard with the Fayetteville Police Department at (910) 549-7326 or Crimestoppers at (910) 483-TIPS (8477). Crimestoppers information can also be submitted by visiting http://www.fay-nccrimestoppers.org/send_a_tip.aspx and completing the anonymous online tip sheet or by text-a-tip on your mobile device by sending a message to 274637 (in the text box type "4Tip" followed by your message).