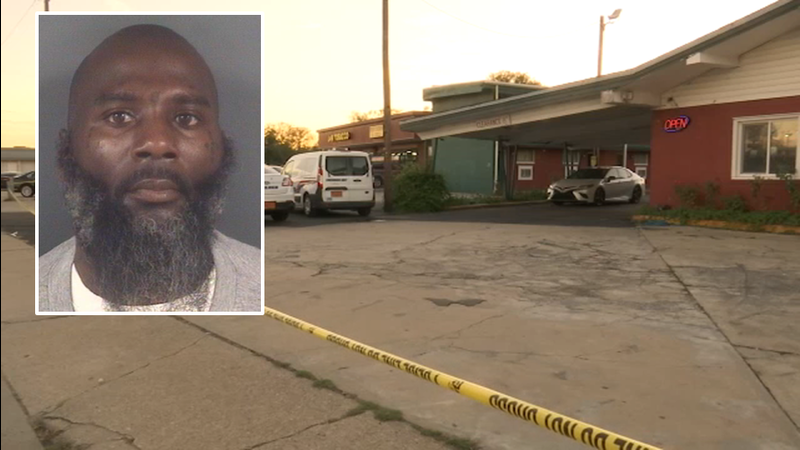 FAYETTEVILLE, N.C. (WTVD) -- The Fayetteville Police Department is searching for an 'armed and dangerous' man after a woman was found dead at a Fayetteville motel on Wednesday afternoon.

It happened just after 4:30 p.m. when police said they found a body in one of the rooms of a Travel Inn at the 300 block of N. Eastern Boulevard. Police later identified the woman as 26-year-old Meoshia Corbett.

Police are now asking for the public's assistance in searching for 46-year-old Phillip Jerome Little who was charged with first-degree murder in the investigation.

Little is described as standing five-foot five-inches and weighs 190 pounds with brown eyes. Police say he was last seen operating a 2006 dark blue Jeep Grand Cherokee with a North Carolina License plate that reads 4862DV. Police consider Little to be armed and dangerous

NOW: @FayettevillePD say a woman was found dead inside a room at the Travel Inn along north Eastern blvd. Investigation ongoing #ABC11 pic.twitter.com/BvY5wNP1Bb

Waymon Gainey, the manager of Big Mikes Car Wash, next door to the motel says he called police after one of his former employees walked in, left a note and took off in a car.

"I opened the note and saw the (motel) key, I read the note. It had a phone number on it. It said 'tell him that I killed his daughter at the Travel Inn,'" Gainey said.

The only thing is, Gainey is unsure who the 'him' in the note is.