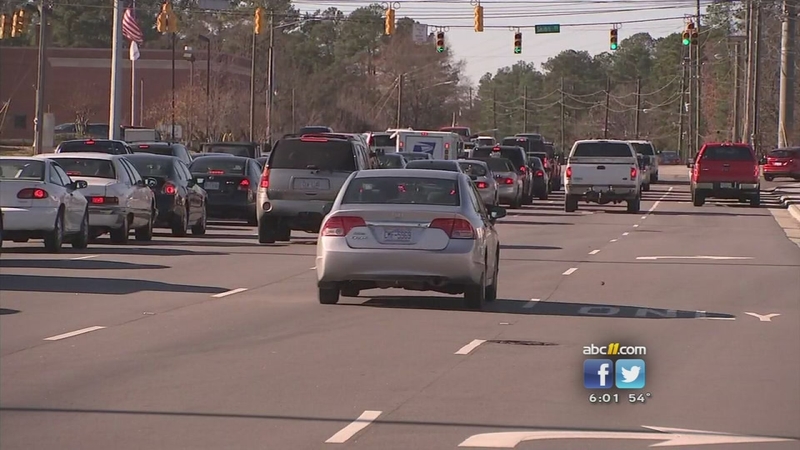 FAYETTEVILLE (WTVD) -- A march mirroring national response to police-involved deaths of unarmed black men is scheduled for Saturday afternoon. It will come down one of Fayetteville's busiest corridors, Skibo Road.

"We wanted people to be able to see what's going on," said organizer Swan Davis, referencing the recent Times Square protest. "And then they can stop, and ask 'What's this all about?,' and then we have a conversation going."

Organizers have spent the last couple of weeks meeting with the police department, community leaders and clergy, and Cross Creek Mall officials to organize the Unity March. They said the event is meant to be peaceful, but will draw hundreds through a particularly busy corridor.

The march begins at 1:30 p.m. at the Skibo Road Walmart and will continue in a square down Morganton and McPherson Church roads. It will come back up Skibo, and cap with speeches and prayer in the Cross Creek Mall parking lot.

Fayetteville police declined to comment on security or participation plans for the march. Howze reminded people that the march will not include a "die-in" where protesters lay in the streets. He also said they will not walk in the middle of the roads, rather on the sides.

While the recent deaths of unarmed black men at the hands of law enforcement have sparked national conversation, debate and marches, Davis said this event will open up the conversation between the community and local police.

"We feel it's only right that we support what's going on nationally, but we recognize issues in our community that we need to come together on, as well," said Davis.

Davis said he's hoping to talk about police sensitivity re-training in an attempt to better understand minority communities' culture and environment. He said he also wants to have a conversation about stereotyping, employment, especially for felons, and police department transparency.

"We want to pass the message that maybe they need to have a little sensitivity training to understand that it's not that bad," added Howze. "In turn, we want the kids to understand that if you're stopped by the police, do what they say. Don't be a vigilante, then you might disrupt that cop that one day that he's having a bad day. That [day] he wants to leave his house and do what's right, then when you provoke, things happen. We want people to remain humble."

Meanwhile, Fort Bragg officials sent out a message to its soldiers on Friday. It acknowledges their right to peaceful protest, but discourages them from wearing uniforms. Despite no indications of a violent protest, Bragg officials are also asking that if the event takes a turn that soldiers immediately leave the area.

"Our men and women in uniform put themselves in harm's way to ensure our freedoms, including our First Amendment right to peaceful assembly," said Fort Bragg spokesman, Tom McCollum. "If our service members choose to participate in the planned march, we want them to do so in a way that keeps them safe and out of trouble."