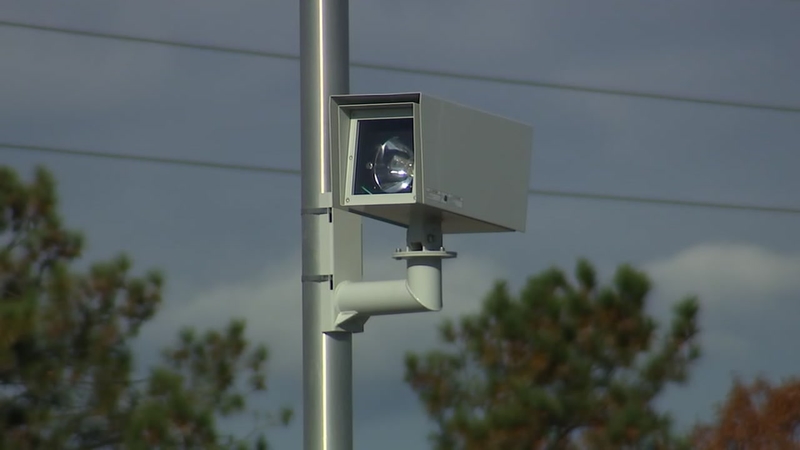 A state board ruled that red light cameras in Wilmington are in violation of state law. Those same cameras are used in Fayetteville, but they won't be going away anytime soon.

Research shows drivers who make the split-second decision to speed through a red light are blamed for more than 800 deaths in America.

This is why many cities have installed an eye in the sky to watch and ticket the most notorious red-light runners.

Meanwhile, the camera-maker American Traffic Solutions, now known as Vera Mobility, might be getting a citation of their own. A state board found that they broke the law when they put their cameras up in Wilmington.

According to a letter obtained by ABC11, the manufacturer is accused of practicing civil engineering without a license.

Jernigan explained that the engineering, or construction plans, weren't certified by a board certified engineer on Vera Mobility's staff.

"The conversation here was whether or not that type of would require such a seal or not and the board determined it does," said Jernigan.

Despite the investigation, it's still a green light on the city's Red Light Camera Program. "I don't play with the cameras at all I don't like to deal with them," said driver Kevin Murphy

One driver even questioned whether the cameras were effective.

"Are they really working? You know? I guess so. I don't know," said Paula Frank.

New research shows they are. The city said they have issued 96 percent of the more than 30,000 red light tickets and those people haven't gotten a second one.

"After getting the ticket and I just had my first accident. It just makes you a better driver," said driver Amanda Savage.

The City of Fayetteville is now working with their vendors to bring the cameras up to code but in the meantime, they're urging drivers to follow the rules of the road.