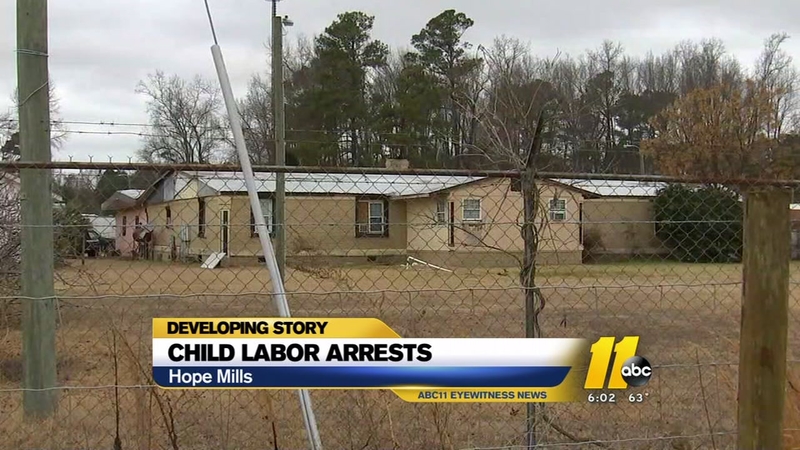 According to the Sheriff's Office, John McCollum, the owner of John C's Fish Market, along with nine others, were forcing children to work full time for little or no compensation.

The Cumberland County Sheriff's Office told ABC11 about a meeting with the Department of Labor. If the federal agency joins the investigation, it won't be a criminal probe, rather a civil investigation that would release the lost wages to the victims.

Additionally, federal authorities may be looking into the fraud associated with the religious compound where many of the victims lived.

According to the arrest warrant, Brenda Joyce Hall, one of the 10 people caught up in the probe, is charged with three counts of Obtaining Property by False Pretenses after she allegedly made a fake high school transcript for one of the children to get financial aid money from Wake Technical Community College.

This is the McCollum ranch where a pastor is accused of holding tent revivals to lure children into child slavery. Authorities say this went on for 20 years. We hear from neighbors at 4:00 #abc11 pic.twitter.com/MUuT4WCc30

Investigators said that money then went to the McCollum Ranch where many of the children were lured through tent revivals.

"This was their lifestyle. They live this and if they were to go against the charge or be a witness for the state, they lose their jobs, lose where they live," said Lt. Sean Swain of the Cumberland County Sheriff's Office.

MCCOLLUM WELL KNOWN TO THE LAW

McCollum, the compound leader and former pastor of Holy Tabernacle Church, is no stranger to the Sheriff's Office.

In the early 1990s, deputies investigated several felony child abuse cases. It wasn't until one of the victims ran away from the compound last year that authorities were finally able to build a case. District Attorney Billy West said building a case now will be just as tedious.

"These types of cases can be very complex and very difficult," West said. "We've got the resources here to do it but that will be one of the challenges, just to be able to look at what the investigation has uncovered and see what charges we can go forward on and how we can get justice in this case."