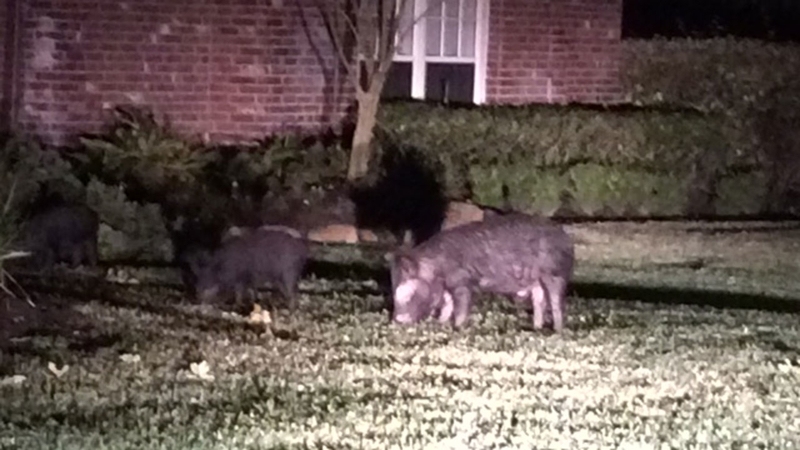 KINGWOOD, TX -- Wild hogs have made a comeback in Kingwood. In the past few weeks, complaints have poured into the city about the feral animals. The city said they're now taking action.

It was back in 2013 when community associations had to hire trappers to help reduce the hog population. They've already done so again as the city works to put their own trapper in place.

Take a quick drive around neighborhoods like the Fosters Mill subdivision and you can the hogs have certainly left their market. The animals tear up yards as they look for food overnight. Neighbors, like Kyle Ferrall, said it's wild to see just how quickly they can destroy lawns.

"They're worse than they ever have been. I know there is construction where there were woods. I'm sure some of them have been dislocated but yikes, it's not good," said Ferrall. "People are fed up and they're looking for some help from any city, state agency."

Houston City Council Member Dave Martin represents District E, which consists of Kingwood. Martin said he understands people's concerns, which is why he explained city dollars will be used to hire a trapper. Martin recently told abc13 the city needed to go through a bid process.

"What we need to do is go through the bid process. We are a government entity and that's slowing us down a little bit," said Martin.

The process should be completed soon and a trapper should be on the ground this week, according to Martin. The council member said they're up against mother nature in this case.

"These feral hogs can have babies at six months old. Imagine when you have 10 piglets every six months. That really is multiplying the problem that we're having back here," said Council Member Martin.

"The unfortunate thing is we can't take matters into our own hands. We can't shoot a feral hog within the city of Houston. Therefore, we have to trap them. The trappers will trap them and then sell the meant. That's the good byproduct of the whole thing. It would be nice if we could them quicker."

Martin said trappers plan to focus their efforts near Lake Houston. He said the hogs tend to migrate towards the water. The city is working with police lake patrol to narrow in on the hogs.

For residents like Ferrall, she told Eyewitness News they just want to see relief as soon as possible.

"I do know that there's a lot of tax dollars coming to the city from Kingwood," said Ferrall. "I know we have a history. We've been in the city a lot of time now and we've paid a lot of taxes. I think this is something they need to help the residents with."