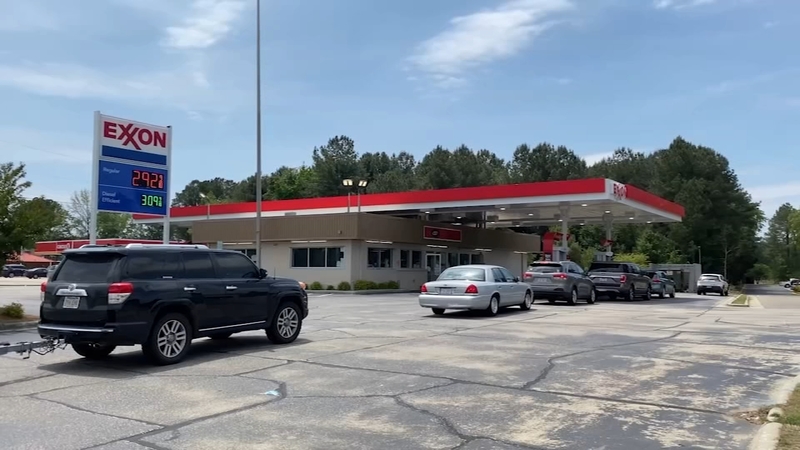 RALEIGH (WTVD) -- The state has seen a minor change in the number of gas stations regaining fuel in the last day, according to GasBuddy which is now reporting 47 percent of North Carolina stations are without gas.

North Carolina hovered somewhere in the upper 50s since Sunday, peaking several days ago with more than 70 percent of stations being empty.

Colonial Pipeline continues to make substantial progress in safely moving other’s product throughout our pipeline system. We can now report that we are transporting refined products (gasoline, diesel and jet fuel) at normal levels and are fully operational.

Experts say the Colonial Pipeline hack didn't cause the shortage. Instead, it was the panic-buying that happened in response.

GasBuddy says data shows North Carolina remains one of the hardest hit states during the shortage. However, all states in the southeast are slowly getting back to normal.

The Associated Press contributed.
Report a correction or typo
Related topics:
personal financewake countyncmorrisvillehackinggas pricespersonal financefinancepipeline
Copyright © 2021 WTVD-TV. All Rights Reserved.
GAS PRICES
Gas prices are at a 7-year high, just in time for Memorial Day
51% of NC stations have no fuel with pipeline back up and running
GAS FINDER: Is there gas near you? Check our map
58% of NC stations have no fuel with pipeline back up and running
TOP STORIES
Fayetteville business gets a ton of support after LGBTQ flag stolen
Old JCPenney store in North Hills undergoing a transformation
Health officials urge COVID-19 vaccinations as Delta variant spreads in US
Carl Nassib comes out as 1st openly gay active NFL player
WEATHER: Hot, humid day with feels-like temps up to 103
Heading back to the office? Experts have tips for anxious pets
Bladen County political consultant pleads guilty to charges
Show More
Wake County couple transforms lives through foster care, adoption
Group calling for NC to investigate Postmaster General Louis DeJoy
Here's what's in the North Carolina Senate budget proposal
Surviving combat to die at home: Soldier picking out his coffin at 35
Teen girl attacked by bear while sleeping in hammock
More TOP STORIES News