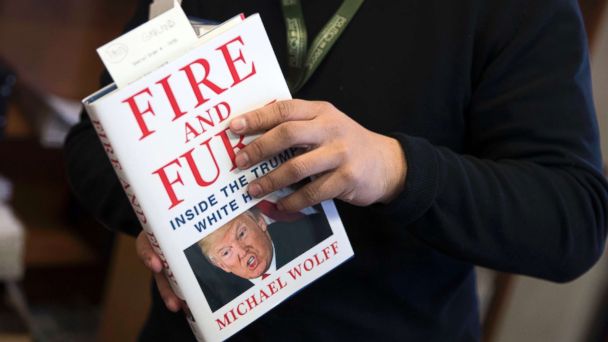 ABCNews
By ADAM KELSEY
Attorneys for the publisher of a controversial new book that provides a behind-the-scenes look at the Trump White House responded forcefully to a cease-and-desist letter sent last week by lawyers for President Donald Trump, arguing that the book is not libelous and that neither retractions nor apologies will be made.

In a letter to author Michael Wolff and publisher Henry Holt and Company last week, Trump's lawyer Charles Harder called for a stop to the publication of "Fire and Fury: Inside the Trump White House." Harder wrote that he was "investigating numerous false and/or baseless statements" about the president contained within the book, and that the text further included defamatory statements and could be considered an "invasion of privacy."

In response Monday, counsel for Henry Holt and Company wrote to Harder that there is "no reason to doubt... that Mr. Wolff's book is an accurate report on events of vital public importance" and that Harder's letter "provides no reason to change this conclusion."

"Though your letter provides a basic summary of New York libel law, tellingly, it stops short of identifying a single statement in the book that is factually false or defamatory," Monday's letter reads. "Instead, the letter appears to be designed to silence legitimate criticism. This is the antithesis of an actionable libel claim."

"Fire and Fury" had yet to be published in full when Harder sent his letter to Henry Holt and Company last week; an explosive excerpt documenting White House in-fighting was posted by New York Magazine on Wednesday. Henry Holt and Company moved up its original Jan. 9 publication date to last Friday and the book quickly became a best-seller. It currently sits in the number one spot on Amazon's book sales list.

Wolff has faced a number of questions about his reporting in the wake of the salacious details that have emerged from the book, but has steadfastly stood by his work. White House officials have further disputed his claim that he held "something like a semi-permanent seat on a couch in the West Wing," and have called the book "fiction."

In responding to Trump's attorney Monday, Elizabeth McNamara, the lawyer for Henry Holt and Company, refutes Harder's claim that the book contains proof of "actual malice," which is required by any public figure pursuing legal action over alleged libel.

Instead of "admit[ting] in the Introduction that it contains untrue statements," as Harder argued, McNamara writes: "Mr. Wolff responsibly tells his readers his approach to confronting the well-established reality that many in this administration, most prominently the president, routinely traffic in verifiably false statements."

The letter concludes by arguing that Wolff and Henry Holt and Company have no obligation to follow Harder's instructions about preserving documents relating to the book, Trump, his family or presidential campaign, but instead will follow the law, and notes the same requirement applies to the president and that such materials would have to be made available should litigation be pursued.
Report a correction or typo
Related topics:
abc newsnational
Copyright © 2020 ABC News Internet Ventures.
More Videos
From CNN Newsource affiliates
TOP STORIES