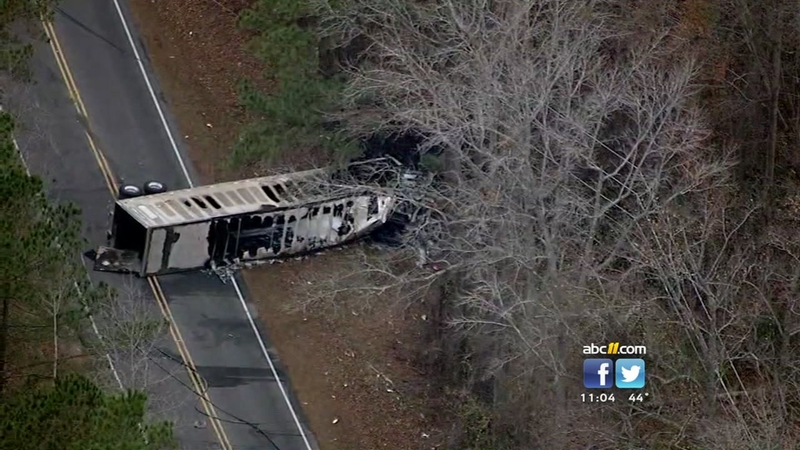 ROBESON COUNTY (WTVD) -- According to the NC State Highway Patrol, two people are dead after a tractor-trailer crashed into a vehicle, setting it on fire.

The 2007 International tractor trailer carrying chemicals ran off the road, struck a highway sign before over-correcting back onto the roadway, and overturning.

The 2004 Mitsubishi steered off the road to the right to avoid impact with the truck, but it ended up colliding with the car, causing them to catch on fire.

Hazmat team out of Fayettevile is cleaning up hazardous material now. The problem is, officials can't get to the scene of the crash until everything has been cleaned up. That means bodies of baby and truck driver are still there. #ABC11

The driver of the truck - 63-year-old Otis Enoch Jr. of Whitsett, NC - was trapped in the vehicle and pronounced dead at the scene.

Driver of the car - 57-year-old Wendell McRae of Lumberton - and the front seat passenger - 29-year-old Niasia Oliver - were both airlifted to McLeod Hospital in Florence.

Their 1-year-old daughter, Windshae McRae, was trapped in the back seat and pronounced dead at the scene.

This community center has been designated as a shelter for those living in the area of the hazardous spill. So far, no one has showed up. Security is on hand waiting to open the doors in case someone needs a place to stay tonight. #ABC11 pic.twitter.com/a16T031Anw

Authorities said it was unclear why Enoch ran off the roadway, but neither speed nor alcohol are considered factors.